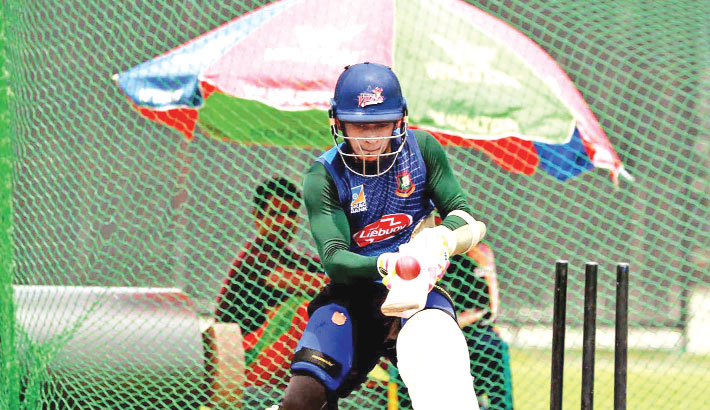 Bangladesh wicketkeeper batsman Mushfiqur Rahim is leaving no stone unturned as he prepares to handle the Afghanistan spinners in the one-off Test series followed by a Twenty20 tri-nation from September.

Mushfiqur is known to be one of the finest Bangladeshi batsmen of his era and a lot depends on him considering the absence of experienced Tamim Iqbal, who preferred to take a break from the upcoming assignment at home.

It is well known fact that extreme training helps Mushfiqur conquer extreme conditions and it remained the same way as he prepares him for the home series against Afghanistan.

After completing his daily fitness drill in the conditioning camp, Mushfiqur is batting for hours against some spinners at the center wicket of the Sher-e-Bangla National Stadium in Mirpur.

According to insiders, Mushfiqur arranged the spinners all by himself and even taking their service at the lieu of money so that who are bowling him at the nets have some kind of motivation to do their job properly.

Apart from the national bowlers it was observed that there were some unorthodox bowlers available at the nets picked by Mushfiqur considering he is well aware that the Afghanistan bowling unit will be largely packed by slow bowlers with an aim to conquer their opposition.

Afghanistan spinner Rashid Khan and Mohammad Nabi will be demonstrating the proceeding in the Test series that includes uncapped left-arm spinner Zahir Khan, who made his ODI debut against Ireland earlier this year.

The tourist spin department will be bolstered with the presence of Mujeeb ur Rahman in the shorter format.

Mushfiqur batting is a sign of his experience, solidity of technique and the biggest reason that he is able to play like this - with the rest of the line-up crumbling around him - is the extreme pressure he puts himself under when he trains.

On many occasions it was observed Mushfiqur put himself through an hour-long running session in the morning and then - despite being exhausted - joined his team-mates for a match simulation in the evening and this routine is unlikely to change in the near future as he has based his entire international career - which began when he was 17 - on working the hardest.

For regular visitors at the Sher-e-Bangla Cricket Stadium it doesn’t come as a surprise to see Rahim arriving at the ground earlier later his team-mates and leaving much after everyone else - he’s a stickler when it comes to his cricketing preparations.

“I’m not growing any younger, so I will try play in a way that I will have more impact. To be honest, I am in the last phase, so I don’t have any time to relax. After playing cricket for 10-15 years now, it is high time to take my game to the next level - like playing a match-winning innings and not just a 50 or 60. I have gained that belief (to take my game to the next level) because when you perform against a strong attack, in tough conditions, you gain that,” Mushfiqur said earlier when his attention was drawn on how he manages to keep his motivation.

The batting approach of Mushfiqur in the nets clearly suggested he was having something in mind and playing shots with the bottom hands dominating on most occasions only suggested he wanted to make sure that there is minimal risk while playing his shots against slow bowlers.

The man was known to have curved his temptation of playing any sweep during his double century against Zimbabwe at home last year and there is every chance he is looking to make any such adjustment to make a noteworthy performance against Afghanistan.