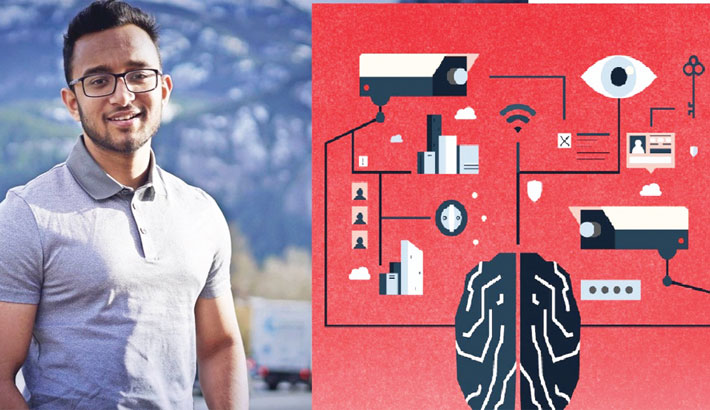 Bangladeshi tech start-up Gaze has been working for service innovation based on artificial intelligence for creating social impact through technology.

“We started in mid 2018, with the mission to transform Dhaka into one of the world's first AI cities. We envision a world where AI can safeguard human life,” said Taus going down to the memory lane.

According to Taus, AI can detect and recognize any threat, emergency, traffic law violation in real-time on a nationwide scale and take action like alerting emergency services or law enforcers.

“This (AI) will significantly improve our living standards, making our cities safer and smarter. That has been our goal from Day 1 and we want to be a global brand in building and deploying technologies like these that power the next generation of cities,”

Taus worked at NVIDIA, the world's number-one manufacturer and designer of processors used in AI (GPUs).

“My team there focused on building technologies that can power AI cities and make the world a safer place. That's when I thought technologies like these can really help Dhaka and other cities around the world,” he added.

Taus explained the founding days of the firm saying,” Motasim and I have been friends for a very long time, so I spoke to him and we decided to start Gaze with a mission to change the world. We also want Dhaka to be one of the most prominent tech hubs in the world and to make that happen, we must excel in next generation technologies like AI, which is what Gaze hopes to do,”.

From NVIDIA, Taus retuned home and started working for development of something good with AI for betterment of society.

“We slowly attracted like-minded people to the team and grew to almost 20 people in a year,”

Taus further said that the idea that we could build a company in our home city that can build technologies making the world a safer and better place was fascinating.

“On top of that, being able to give back to our city and country by working in the forefront of technological innovation and solving problems that concern our people really inspired us. To me, that was and still is the most attractive part about working here,”

Regarding the social impact of technology innovations, Taus explained as saying: “We think our technologies can revolutionize multiple aspects of society. Firstly, we can improve road safety by enforcing traffic rules using AI that can round-the-clock monitor all traffic cameras and penalize any law violator,”

The service also helps detect public safety threats and alert emergency services in realtime in case of accidents on the road for example.

Besides, enterprise software can be used to automate different things in manufacturing and at any workplace, leading the way into Industry 4.0, according to the young entrepreneur.

“We have home security solutions which helps make homes more secure, alert law enforcers instantaneously about any potential threat and save lives. We are also exploring retail, to use our software in automating retail stores as much as possible (like Amazon Go in the US), which means shopping could also become a lot easier using our technologies. There really is no limit to how AI can change our everyday lives - this is just the beginning,”

Taus has dreamt to contribute in transformation of Dhaka into a ‘smart city’ utilizing the artificial intelligence.

“In 2 years, we want to have played a small role in the large scheme of building Digital Bangladesh and realizing Vision 2021,” Taus said and concluded the session.