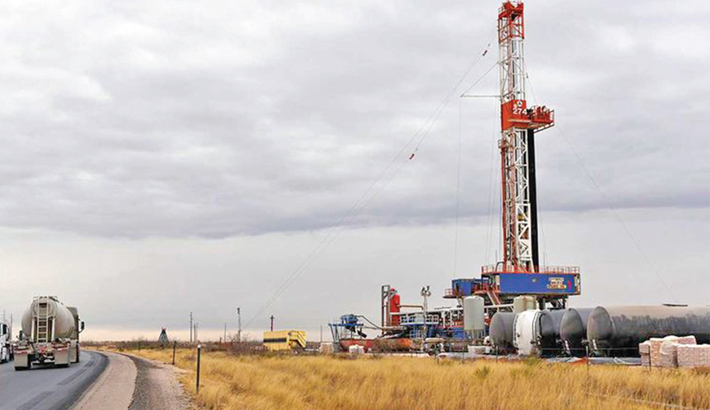 NEW YORK: US oil output from seven major shale formations is expected to rise by 85,000 barrels per day (bpd) in September, to a record 8.77 million bpd, the US Energy Information Administration forecast in its monthly drilling productivity report.

The largest change is expected in the Permian Basin of Texas and New Mexico, where output is seen climbing 75,000 bpd to 4.42 million bpd in September, also an all-time high. That is the biggest increase forecast for the basin since April, report agencies.

Output in North Dakota and Montana’s Bakken region is expected to edge higher by 3,000 bpd to a record 1.44 million bpd, the data showed.

Production increases in the Permian and Bakken have been at the forefront of a shale boom that helped make the United States the biggest oil producer in the world, ahead of Saudi Arabia and Russia.

Output increases in the Permian, the country’s largest basin, had slowed as independent oil producers cut spending on new drilling and completions and focus more on earnings growth.

Still, majors are ramping up spending.

Permian oil production had also surged beyond pipeline takeaway capacity, weighing on regional oil prices for over a year. But the start up of new pipelines, such as Plains All American Pipeline LP’s 670,000-bpd Cactus II pipeline system, are beginning to support prices there.

Separately, US natural gas output was projected to increase to a record 81.6 billion cubic feet per day (bcfd) in September.

That would be up 0.7 bcfd over the August forecast, putting production from the big shale basins up for a fourth month in a row even though the number of rigs in each region has declined since the start of the year.

That is because rig productivity — the amount of gas new wells produce per rig — was up in every region since the start of the year. A year ago in September, output was 73.3 bcfd.

Output in the Appalachia region was set to rise almost 0.4 bcfd to a record 32.6 bcfd.

The EIA said producers drilled 1,311 wells and completed 1,411 in the biggest shale basins in July, leaving total drilled but uncompleted (DUC) wells down 100 at 8,108. That was the biggest monthly decline in DUCs since March 2018.