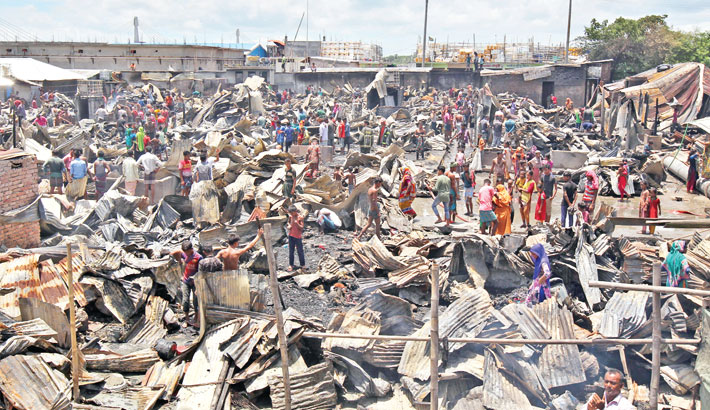 Local people and shop owners gather at fire-ravaged Chaktai Bhera Market in Chattogram city after the blaze destroyed many shanties and shops on Thursday. —Rabin Chowdhury

CHATTOGRAM: Around 100 houses and four shops were gutted in a devastating fire at a slum in the city’s Bhera Market area in Fisheryghat on Thursday morning.

Sources in the Fire Service and Civil Defence, department said a fire broke out at the slum around 9:30am and spread fast engulfing the adjoining tin-roofed houses.

On information, 13 fire fighting units from different fire stations rushed to the spot and brought the flames under control around 11:40am.

Around 100 shops and four shops were gutted in the fire. But, no casualty was reported, said the FSCD, Chattogram Assistant Director Jasim Uddin.

Cause and extent of damages in the fire could not be ascertained immediately, said the AD.

On the other hand, a five-member committee headed by the Additional Deputy Commissioner (General) Md Kamal Hossain was formed to investigate into the fire incident. The committee was asked to submit its report by three working-days, said the sources.

Mentionable, eight persons were burnt alive in a devastating fire in the same area in the early hours of February 16 this year.

However, no casualty was reported in Thursday’s fire as most of the residents of the slum were at workplace during the fire incident, said the FSCD AD Jasim.