We are not one-man army: Mashrafe 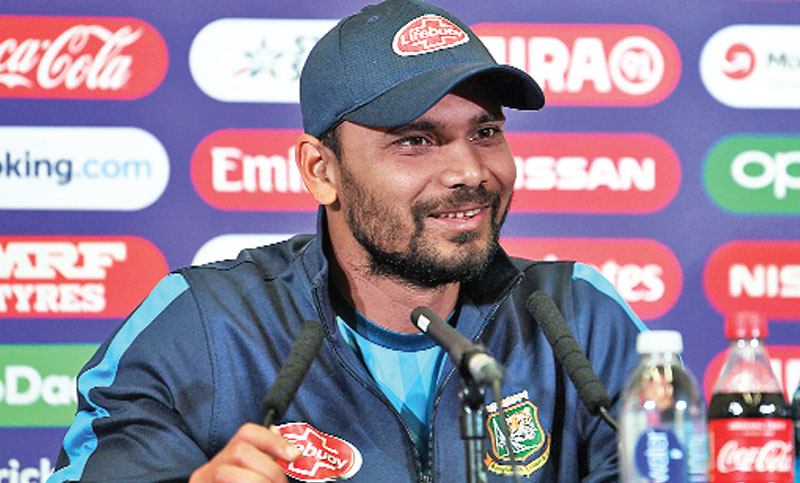 Bangladesh skipper Mashrafe Mortaza insisted that they are not a one-man army despite the team relying too much on their star all-rounder Shakib Al Hasan for match-winning contributions in the ongoing ICC World Cup 2019.

“Shakib is brilliant, even from the moment he started his career for Bangladesh cricket. He’s brilliant and he knows that he is a confident guy and hopefully he’ll keep on going,” Mashrafe told reporters in Nottingham.

“But I won’t say it’s a one-man army. Other bowlers will also have to step up a little bit and emulate what Shakib is doing,” said Mashrafe after providing a list of some small contributions from other members.

Before Shakib played his unbeaten knock, Mustafizur Rahman and Mohammad Saifuddin strangled West Indies in late overs while Tamim Iqbal and Soumya Sarkar gave the team the belief in the big chase with a positive start.

Shakib took his game to a new level in this World Cup, so far scoring 384 runs, but other players of the side, especially the senior core group popularly known as Fantastic Five, failed to match him. As it happens so often, sometime depending too much on one player turns into a dangerous proposition for a team in a major tournament like World Cup when every game tests the ability of a side.

Shakib helped Bangladesh overcome the challenge of West Indies with an unbeaten innings of 124 runs, which prevented their campaign from getting spoiled half-way though.

Mashrafe however was hoping more from his core group of players while he lauded promoting Shakib at number three as a master stroke from team’s point of view.

“As I said earlier what Shakib did is phenomenal. Shakib has always contributed to the team. May be it’s a big tournament that’s why everyone has their eyes on him. That’s one thing and the second thing is the way he is batting at number three that opportunity doesn’t come at number five. How many overs will you play if you bat at number five in a fifty over game? It’s great that he is playing big innings for the team at number three position which we didn’t anticipate at the initial stages, he also didn’t think that everything will go this smoothly,” he said.

“I am literally praying for him so that he can play more of these innings and I think a healthy competition is always good. Shakib is performing so everybody needs to step up too,” he added.

However, Shakib stands on the brink of another milestone and with the form he is in, it becoming a reality looks all the more likely. Coincidentally there was no match in the ICC World Cup as of now that Shakib didn’t come up with a hope to reach a milestone.

He had already scored four half-centuries at the start of the World Cups to join the likes of Sachin Tendulkar, Navjot Singh Sidhu, Graeme Smith and Steve Smith. Only Steve Smith could make it five and his record came during ICC World Cup 2015. So if Shakib can score another half-century against Smith’s side Australia, he can emulate him to reach another milestone.

The talismanic all-rounder is in such red-hot form in this event that when he gets down in the field, records are bound to touch his feat. As it was largely unnoticed he quietly emulated batting genius Sachin Tendulkar in two ODI elite list of batting during the course of his match winning unbeaten 124 runs that helped Bangladesh pull off a comprehensive 7-wicket win over West Indies at Taunton on Monday.

His 124-run knock which came off just 99 deliveries, was his fourth straight fifty plus knock in this World Cup and also his fifth successive fifty plus score.

His fourth fifty plus knock at the start of ICC World Cup 2019, which was also his fifth successive ODI fifty plus innings, put him alongside Sachin Tendulkar who also had those two records.

Sachin scored four straight fifty plus knocks in 1996 and it was Navjot Singh Sidhu’s feat (ICC World Cup 1987) that he had equalled. Graeme Smith is the other player on the list who enlisted his name in the chart on 2007. Steve Smith from Australia, stands atop on the unique list with five straight fifty plus scores (ICC World Cup 2015) at the start of the campaign.

Shakib’s knock on Monday took his tally of runs to 384 run (from four innings) as he stands atop in the run-getters list in ICC World Cup 2019 as of now. Besides, he also has 5 wickets to his name sitting jointly sitting at 16th spot.

His knock also brought with it two other fresh milestones. While he became the second Bangladeshi player to amass 6000 ODI runs, he became the quickest player to join the four-member ODI double club of 6000 runs and 250+ wickets which includes Sanath Jayasuriya, Shahid Afridi and Jacques Kallis.