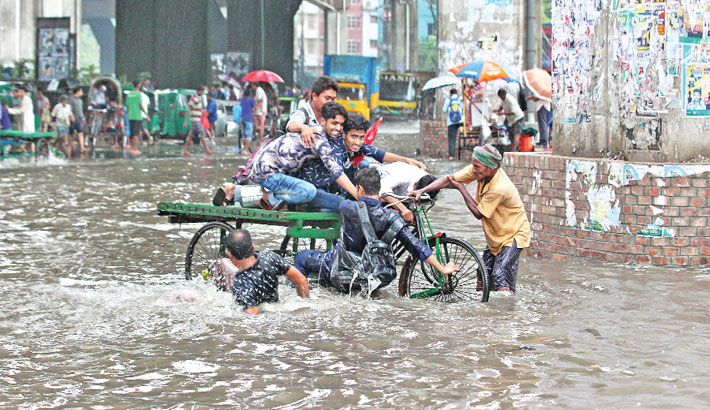 Passengers of a rickshaw-van fall into water in Road No-2 Gate area of Chattogram city on Saturday. Many roads and low-lying areas in the port city went under water after heavy rains. —Rabin Chowdhury

CHATTOGRAM: Residents of some low-lying areas in the port city experienced immense sufferings due to waterlogging caused by heavy rainfall on Saturday.

Many city areas and roads went under knee-deep to waist-deep water due to the heavy downpour on the first day of the rainy season.

The rain that started around 1:30 pm continued till 2:15 pm. Met Office in the city’s Patenga area recorded some 20mm rainfall during the period.

Commuters were the worst victims of the waterlogging as the movement of traffic came to a halt at some roads at that time.

Public transports charged additional fare from the commuters cashing in the situation. However, the logged-water drained out slowly after the rain stopped, said sources.

Forecasting Officer Sheikh Farid Ahmed of the met office said there is also the possibility of moderate to heavy rainfall on Sunday.

Besides, water also remained stranded on some portions of ‘Akteruzzaman Flyover’ stretching from the city’s Lalkhan Bazar to Muradpur.

Forkan Uddin, a resident of the city’s Sholoshahar Gate No-2 area, said Muradpur to GEC intersection went under keen-deep to waist-deep water causing immense suffering of the commuters.

The suffering got aggravated when rickshaw-pullers charged extra fare amid an acute crisis of public transport, he said.