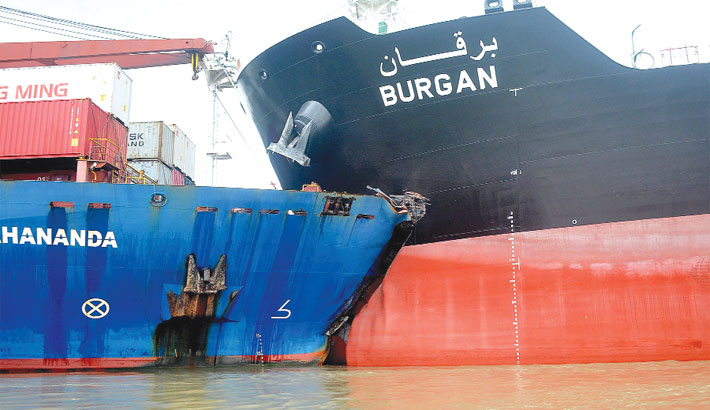 Chattogram: Marine traffic on the Chattogram port’s Karnaphuli channel resumed three hours after a head-on collision between a feeder vessel and an oil tanker at the outer anchorage on Friday morning.

Though forecastles of both vessels were damaged badly in the accident, the Karnaphuli channel narrowly escaped a disaster, said sources concerned.

The feeder vessel ‘X-Press Mahananda’ from Sri Lanka was approaching towards the port jetty while oil-tanker ‘MT Burgan’ was leaving the port after offloading oil at the jetty at around 8:30 am.

As the vessels reached near the ‘Chattogram Boat Club,’ they collided head-on reportedly to save a third vessel.

Front sides of the vessels were dented following the collision. “But no casualty was reported,” said Chattogram Port Authority (CPA) Secretary Omar Faruk.

The accident caused suspension of movement of vessels to and from the port jetties at that time, he said.

On information, CPA pilots, officials and rescue boats rushed to the spot.

Later, five tugboats separated the vessels and took to Chattogram Dry-Dock after an effort for around three hours, said Faruk.

A three-member committee headed by CPA Deputy Conservator Captain Faridul Alam was formed to investigate into the accident. The committee was asked to submit its report by three working days.

Vessel movement to and from the port was resumed around 11:30 am, added the secretary.