How Far Is The Compensation For Road Accident Victims? 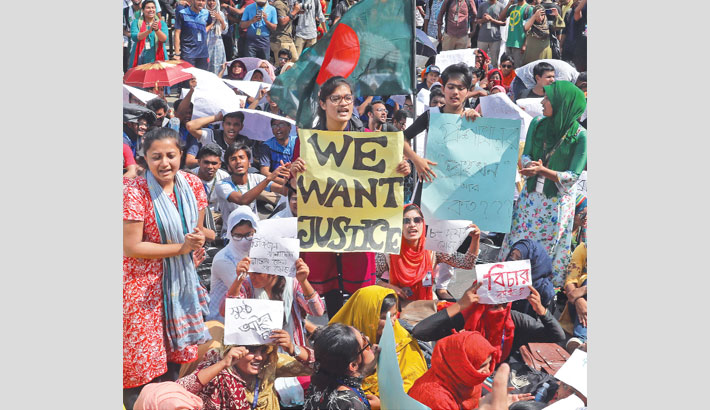 The joy of Eid-ul-Fitr celebration turned into despair for many people due to the dejected deaths caused by a number of fatal road accidents. Series of headlines displayed in the scrolls, news aired on TV channels and reports published in the newspapers and on online news portals regarding the 221 deaths and 1027 injuries in 185 accidents clearly point out how holidaymakers had to make their Eid journey risking their lives. And it was not a lone case of this year’s Eid-ul-Fitr rather it happens during every Eid. A total of 339 people were killed and 1,274 people were injured in 277 road accidents during the Eid-ul-Fitr and at least 259 people were killed and 960 people were injured in 237 road crashes in the Eid-ul-Azha of the last year! The number of deaths in 2017 was 274 during Eid-ul-Fitr and 322 in Eid-ul-Azha! Apart from fatalities during Eid journeys road accidents are everyday incident in Bangladesh. A total of 1,212 people were killed and 2,429 people were injured in 1,168 fatal accidents in the first three months of this year! At least 7,221 people were killed and 15,446 people were injured in 5,514 road accidents across the country alone in 2018! In 2017, 4,979 road crashes left 7,397 dead and 16,193 injured! It is mentionable that on an average 14 to 20 people die everyday in road accidents in Bangladesh! These figures may seem like mere numbers to some people but the persons who lost their family members in road accidents can feel the actual pain of these devastating fatalities. Losing the only bread earner many families fall in such terrible situation that even their long struggle cannot help them to turn around. And the accident survivors need to face the consequences of fatal injuries for the rest of their lives. Unfortunately most of the family members of deceased people and injured persons don’t know how to claim compensation from the perpetrators who are responsible for their sufferings. And the people who seek justice following legal procedure, in most of the cases, are deprived of compensation.

What do laws say about compensation?

There are several laws in our country including the Penal Code 1860, the Motor Vehicles Ordinance 1983, the Employers’ Liability (Compulsory Insurance) Act 1969, the Road Traffic Act 1988, the Consumer Rights Protection Act 2009, the Fatal Accidents Act 1855 and the Road Transport Act 2018, which deal with the instance of wrongful death of a person. Besides, compensations can be claimed under some other statutes and regulations as well. According to these laws, families, beneficiaries or the dependants i.e. wife, husband, parent and child of the deceased has a statutory right to file a suit for damages against someone whose wrongful act, neglect or default has caused the death. In case of these incidents the court may give such damages as it may think proportioned to the loss resulting from such death to the parties respectively. The court by its judgment or decree shall direct how the recovered amount of damages shall be distributed amongst the before mentioned parties after deducting all costs and expenses. But none of these acts have any principle for determining the matters that should be taken into consideration for estimating damages. 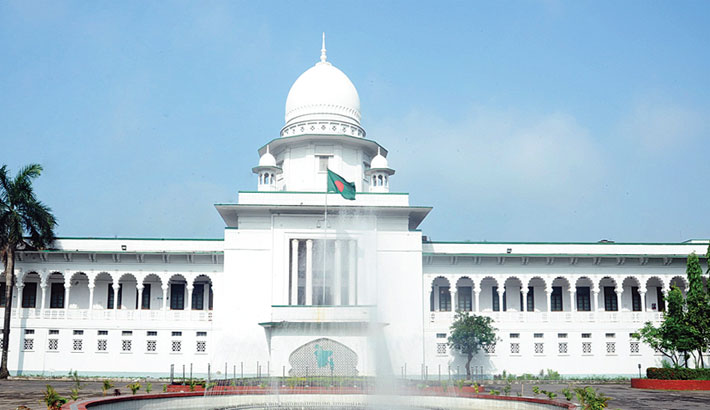 In need of legal reforms

Albeit there is no specific guideline for determining the amount of compensation for the family members of the deceased persons, the judges can settle these issues. But unfortunately when it comes to ensuring compensation for the injured persons in road fatalities, existing laws offer little respite to them! When road accident victims lose a part of their body as vital as their hands or legs, apart from bringing the offender to book court must address the innumerable pecuniary and non-pecuniary losses that are bound to flow out of this bodily injury. But such instance is rare in our country. On the other hand, in some cases the court makes the whole process of ensuring compensation meaningless by determining unbelievable amount of fines. Thus fines should be ordered reasonably. Court fees increase with the amount of the compensation order which seem too high for the victims of poor economic background. In such situation tort law can deal with these cases as it tries to redress the victim in monetary terms and allows the court to impose legal responsibility on third parties who should be held accountable (but escape criminal liability) such as bus owners and operators who employ unqualified drivers to run their unfit buses and directly encourage reckless driving by paying these drivers according to the number of trips they can make instead of introducing a monthly payment system.

Sometimes allegations over road accidents are settled through arbitration between the victim’s families and the accused. But when the victims or their families seek compensation through court order, they just get frustrated due to the time-consuming mechanism of our justice system. For example, Mozammel Hossain Montu, the then news editor of the daily Sangbad, died on December 16, 1989, as a mini-truck of Bangladesh Beverage Ltd. ran over him. Following the accident his wife Rowshan Akhter filed a lawsuit with the lower court on January 1, 1991. The judicial court gave the verdict after five years of filing the case and the High Court verdict came after another five years. The Appellate Division passed the verdict on April 13, 2016, that read that the victim’s family is entitled to get compensation of 17 million taka. But even after three years, the compensation has not been handed out. 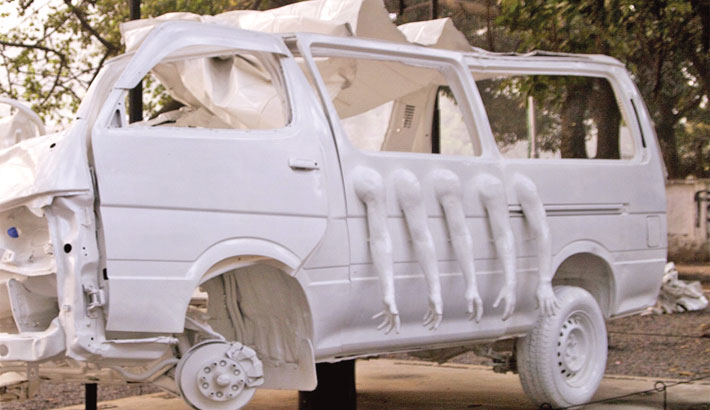 Filmmaker Tareque Masud and ATN News’s chief executive officer and cinematographer Mishuk Muneir died with three others in a road accident on Dhaka-Aricha Highway in Manikganj on August 13, 2011. Two suits were filed for compensation according to the provisions of the Motor Vehicles Ordinance. The High Court gave the verdict on December 3, 2017, in the case filed by Tareque Masud’s wife Catherine Masud and ordered the bus driver, owner and insurance company to pay a compensation of 46.1 million taka. But they made separate appeals which are awaiting hearing in the Appellate Division. On the other hand, the compensation case filed by Mishuk Munier’s wife Monjuly Kazi is awaiting hearing in the court.

A student of Government Titumir College Rajib Hossain’s right hand was sandwiched between two buses when their drivers tried to overtake each other on April 3, 2018. The luckless boy died nearly two weeks later. Following a writ petition filed by lawyer Ruhul Kuddus, on May 8 last year, the High Court ordered BRTC and Sajan Transport to pay Tk 10 million as compensation to Rajib’s two younger brothers within a month. The Appellate Division suspended the order on May 22 last year and ordered the High Court to constitute a liability committee. The committee submitted a report in the last October. And since then the hearings on the issue are going on. 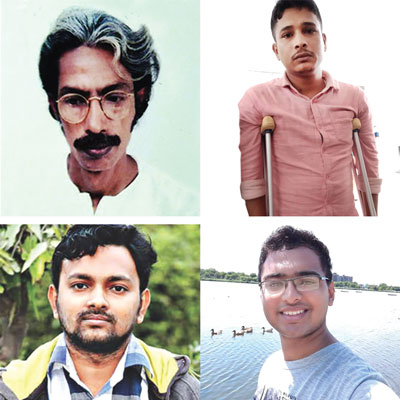 A luxury coach of Green Line Paribahan hit a private car on the slope of Mayor Hanif Flyover on April 28 last year. When private car driver Russell Sarkar stepped out of his car to signal bus driver Kabir Hossain to stop, an altercation broke out between them. Kabir fled the scene by running over Russell! Consequently Russel lost a leg. Responding to a writ petition filed by lawyer Umme Kulsum the High Court on March 12 ordered Green Line Paribahan to pay Tk 5 million to Russel as compensation within two weeks. The bus company’s appeal to the Appellate Division was dismissed on March 31. They were forced to pay Tk 500,000 to Russel on April 10 and the court ordered Green Line to pay the remaining Tk 4.5 million within a month. In the last hearing on May 22 the HC expressed its indignation at Green Line Paribahan for their delay in compensating Russel.

Two students of Shahid Rameezuddin Cantonment College Abdul Karim (Rajib) and Dia Khanam (Mim) were killed by a bus of Jabal e Noor Paribahan on July 29, 2018. Following a writ petition filed by a Supreme Court lawyer on July 30 last year the High Court ordered the transport authorities to pay Tk 500,000 to the families of Rajib and Mim to meet the immediate costs. However, each of the family was paid Tk 500,000. Albeit the bus company paid the immediate costs in the face of the road safety movement, it was not the compensation.

Bangladesh University of Professionals (BUP) student Abrar Ahmed Chowdhury was killed in a bus accident by Suprabhat Paribahan in the capital’s Nadda area on March 19 this year. Then lawyer Ruhul Kuddus filed a writ petition seeking compensation. On the preliminary hearing on March 20, the High Court ordered to pay Tk 1 million to Abrar’s family as exigency cost. The transport company appealed to the Appellate Division and the appeal was dismissed but the exigency cost has not been paid to the family of the deceased yet.

With more than 85 deaths for every 10,000 registered motor vehicles, Bangladesh has one of the highest rates of deaths due to road accidents in the world. The country must develop an effective strategy to identify the role of each and every offender behind a road crash as road accidents strike deadly blows to the victim’s family members. Particularly the poor families struggle more than those who are better off. The loss of earnings, together with medical expenses, funeral costs and legal fees, can have a ruinous effect on their family’s finances. The staggering fact is that in most cases the victims and their families remain deprived of their deserving compensation here when it is a common and established practice in most of the countries of the world. Monetary form of compensation cannot undo the loss suffered, but it is a solace to aggrieved persons. Besides, this practice works as a warning to the potential offenders. Thus Bangladesh should form a special tribunal to settle the compensation cases to hold the perpetrators accountable and offer a relief to the road accident victims and their family members from the lengthy process of judicial system.