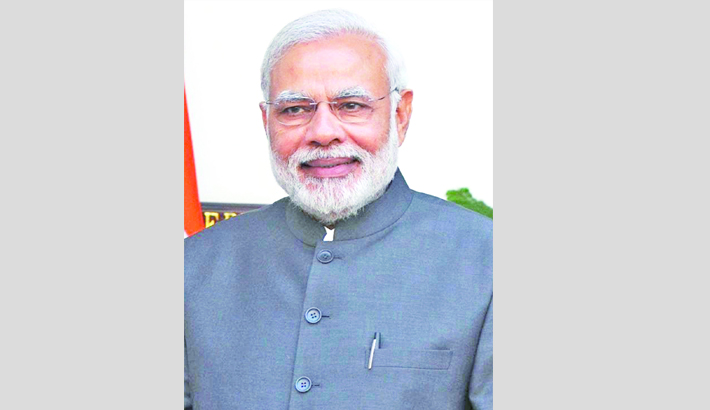 Indian Prime Minister Narendra Modi, who returned to power in a thumping victory in the Lok Sabha elections and was scheduled to take oath on May 30, was likely to visit Bangladesh as his first foreign trip, diplomatic sources here said Saturday.

The sources said both Modi and his Bangladesh counterpart Sheikh Hasina were eager to start working as early a possible.

Sheikh Hasina telephoned Modi to congratulate as a gesture of goodwill just like the Indian premier had done when the Bangladesh leader returned to power in the 30 December 2018 national elections.

A South Asian diplomat told the Daily Sun that the two leaders during their brief telephone conversation agreed “to find a early date to meet to start working on bilateral ties.”

“Dates are yet to be fixed which will be done through mutual consultations,” he said adding that the first the Indian Foreign Secretary /// postponed visit would be rescheduled.

“His visits to Bangladesh and Bhutan are pending and as a custom the first foreign visit is to a neighbourhood country,” Subhajit Roy, senior editor of the Indian Express newspaper, told the Daily Sun when asked about the visit.

He added “I will not be surprised if Bangladesh is the PM’s first foreign trip as his ‘Neighbourhood First” policy has been most successful with Bangladesh ... the two leaders have very good chemistry.”

Agreed Suhasini Haider, diplomatic editor of The Hindu, saying that “it has been a tradition to visit a neighbouring country first ... if it takes place it will be after mid-June.”

The diplomatic sources pointed to the crucial land boundary agreement which was implemented without a hitch under Modi.

A statement issued by the Indian External Affairs Ministry here in New Delhi after the telephonic call said Sheikh Hasina was among the first world leaders to greet Prime Minister Modi.

It said “The two leaders pledged to continue to raise the India-Bangladesh relationship to unprecedented new heights. They recognise the importance of rapidly completing on-going plans for deepening the partnership, security trade, transportation, energy and people to people ties.”

“Doing so within the next 3 years years would have specific significance in view of the centenary of the birth of Bangabandhu Sheikh Mujibur Rahman in 2020 and the 50th anniversary of Bangladesh’s Liberation in 2021,” it added.

Bangladesh and India are traditional friends historically with New Delhi backing backing the Liberation war in 1971. It also sheltered over one million Bangladeshi refugees who fled Pakistani army killings.

Meanwhile, Modi was scheduled to be sworn-in for a second five-year term on 30 May and he along with his cabinet resign the day after the results were announced. President Ram Nath Kovind requested the premier to continue to look after the state affairs until he was sworn-in as per the constitution. Kovind dissolved the 16the Lok Sabha on Saturday to prepare for the newly elected saffron-painted 17th house.

Modi stunned the electorate, political rivals and the world with his thumping historic victory taking 352 out of the 542 seats up for grabs by his Bharatiya Janata Party (BJP) – led National Democratic Alliance (NDA).