Schoolchildren step up fight for climate change in global strike 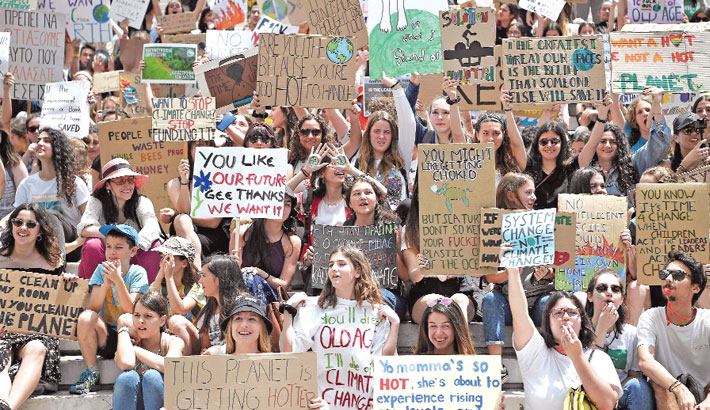 Young demonstrators hold placards against climate change during a ‘Fridays for climate’ protest in front of the Greek Parliament in Athens on Friday as part of a global youth campaign ahead of the EU elections. — AFP PHOtO

School students around the world have gone on strike to demand action on climate change. Organisers expect more than one million young people to join the protests in at least 110 countries on Friday, reports BBC.

They are calling on politicians and businesses to take urgent action to slow global warming.

The strikes are inspired by student Greta Thunberg, who has become a global figurehead since protesting outside Sweden’s parliament in 2018.

Carrying a “school strike for climate change” sign, the then 15-year-old said she was refusing to attend classes until Swedish politicians took action.

The solo protest led to various movements across Europe, the US and Australia, known as Fridays for Future or School Strike for Climate.

The last co-ordinated international protest took place on 15 March, with an estimated 1.6 million students from 125 countries walking out of school.

The action on Friday began in Australia and New Zealand.

In Melbourne, 13-year-old Nina Pasqualini said she was joining the strike because she was worried about “weather disasters”.

“Every time we have huge a bushfire here another animal might go extinct,” she told Reuters news agency.

Australia just had its hottest summer on record and climate change is seen as the cause of the increasing frequency and severity of droughts, heat waves, floods and the melting of glaciers around the world.

In 2018, global carbon emissions hit a record high and UN-backed panel on climate change last October warned that to stabilise the climate, emissions will have to be slashed over the next 12 years.

Earlier this month, a UN report warned that one million animal and plant species were now threatened with extinction.

Sophie Hanford, a national organiser in New Zealand, said Friday’s strike was “only the beginning”.

The protesting students have vowed to continue boycotting classes on Fridays until their countries adhere to the 2015 Paris climate agreement, which aims to prevent global temperatures from rising 1.5C (34.7F) above pre-industrial levels.

As countries around the world woke up, the action spread.

Strikes were organised in Asian nations including India, Afghanistan Thailand and Japan.

In Europe - where the movement first gained traction - images of mass strikes were shared on social media.

“Inaction equals extinction” and “save the world not your money” read some of the placards on display.

In London, protesters planned to cycle to Parliament Square to demonstrate against air pollution caused by cars. Similar “velothons” and marches were also organised elsewhere in the UK.

Miss Thunberg shared a picture of herself on Twitter holding a sign with the Swedish slogan “skolstejk for klimatet” (school strike for climate).

In an open letter published in Germany’s Süddeutsche Zeitung on the eve of Friday’s strike, Miss Thunberg and prominent German climate activist Luisa Neubauer, 22, called on older generations to join the action in September.

“This is a task for all humanity. We young people can contribute to a bigger fight, and that can make a big difference. But that only works if our action is understood as a call,” they wrote.

“This is our invitation. On Friday, 20 September, we will start an action week for the climate with a worldwide strike. We ask you to join us... Join in the day with your neighbours, colleagues, friends and families to hear our voices and make this a turning point in history.”