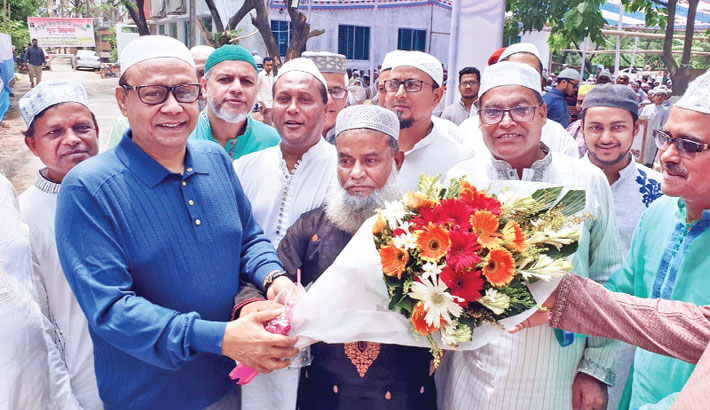 The mosque has been constructed on three khatas of land beside Road No-15 in Block-G of the area.

While addressing as the chief guest, Ahmed Akbar Sobhan expressed his happiness observing construction of the first floor of the mosque within a short span of time.

“I am delighted to see that the first floor of the mosque was constructed within a short period of its planning,” he said.

He donated more three khatas of land for extension of the mosque so that a large number of people can offer their prayers.

He suggested vertical extension of the mosque to accommodate adequate number of devotees.

He pledged his support for every piece of good and noble deeds in Bashundhara Residential Area.

Apart from it, he supported construction of Beraid Purbapara Jame Mosque at Badda in the capital. He inaugurated the mosque in May this year.

The Bashundhara chairman solicited support from all concerned for implementing social welfare, charitable and religious projects.

“I will be always with every good work. But I cannot implement every project alone. So, I need support from all concerned.”

Mostafa Hossain, a businessman and a resident of G-Block in the residential area, presided over the inaugural session.

He expressed his gratitude to the Bashundhara Group chairman for donating the land and extending other logistic support for constructing the mosque.

“I met Bashundhara Group Chairman Ahmed Akbar Sobhan and informed him of our plan of construction of a mosque at G-Block. I told him that the mosque was being constructed on three khatas of land. He said that the land was not enough. He donated more three kathas for the mosque,” said Mostafa Hossain.

Hundreds of house owners and tenants and other people offered prayers also.