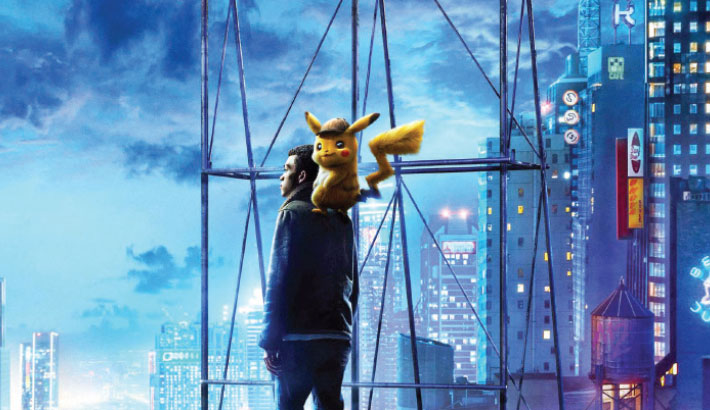 As a piece of storytelling, the live-action Pokémon movie ‘Detective Pikachu’ fails spectacularly. Warner Bros has the impossible task of trying to make the film appealing and likable for a movie-going audience that extends beyond nostalgic adults reminiscing over their trading cards, and kids caught up in their current Pokémon obsession.

‘Detective Pikachu’ can’t ever hope to achieve what ‘The Pokémon Movie’, a 1999 animated classic that saw children drag their less-than-enthused parents into theaters around the country, did for fans of the game. ‘The Pokémon Movie’ was a rare jewel that found emotional depth in a superficial topic. ‘Detective Pikachu’, on the other hand, is an attempt to be more than a video game adaptation that pays homage to Pokémon - the creators clearly want to turn its Pokémon into actual characters, in a world that doesn’t find them exceptional at all.

Set in Ryme City, a neon-soaked experimental world in which humans and Pokemon co-exist in relative harmony, the truly trippy production has its fitfully entertaining charms. There were a couple of telling clues that pointed in that direction, primarily the welcome presence of Ryan Reynolds, who has brought a generous sampling of his sardonic Deadpool sensibility to the voicing of the title role.

Then there’s the behind-the-camera talents of the production’s director and co-writer Rob Letterman, who previously did R.L. Stine justice with the first Goosebumps feature outing, again tossing together dry humor, nostalgic sentimentality and a healthy visual effects budget to workable effect, even if those elements never actually coalesce.

Still, there’s enough here to please both Pokemaniacs and the Poke-non, which should translate into a nice chunk of Pokemon-ey (sorry) for Warner Bros. when the movie arrives on North American shores on May 10, a week after its Japanese bow.

Taking many of its plot points from the 2016 Nintendo game of the same name, the storyline is centered around Tim Goodman (Justice Smith), the affably nerdy 21-year-old son of a private investigator who is believed to have perished in a suspicious car crash. Upon arriving in Ryme City, the sprawling metropolis that was the scene of his estranged dad’s crime-solving, Tim encounters his former partner, a hard-boiled, coffee-guzzling fuzzy yellow Pikachu (Reynolds) who happens to speak perfect noir English that only Tim can hear.

Determined to get to the truth behind the elder Goodman’s disappearance, Tim and Det. Pikachu embark on a trek through Ryme City’s seedier backstreets, following a cloud of dense purple smoke that will lead them to a top secret research facility that figures into Harry’s possible demise.

Along the way, they encounter Lucy Stevens (Kathryn Newton), an ambitious intern of a cub reporter, as well as Howard Clifford (Bill Nighy), the Richard Branson-like visionary behind Ryme City whose spoiled son, Roger (Chris Geere), serves as the over-reaching president of Clifford Enterprises. Of course, they also run into all manner of Pokemon, from Bulbasaurs to stressed-out Psyducks to, in one of the more amusing sequences, an especially annoying mime Pokemon.

Although the script, credited to Letterman along with Dan Hernandez, Benji Samit and Derek Connolly, from a story by Nicole Perlman, tends to compartmentalize the comedy, action and emotional bits rather than organically blending them all together, Letterman’s energetic direction manages to hold everything aloft.

Providing a sturdy throughline is Reynolds, who imbues his world-weary Pikachu with the right balance of pith and pathos, while Justice does justice to his necessarily reactive performance, proving adept at both tears and pratfalls.