Harking Back the Holy Badr Day 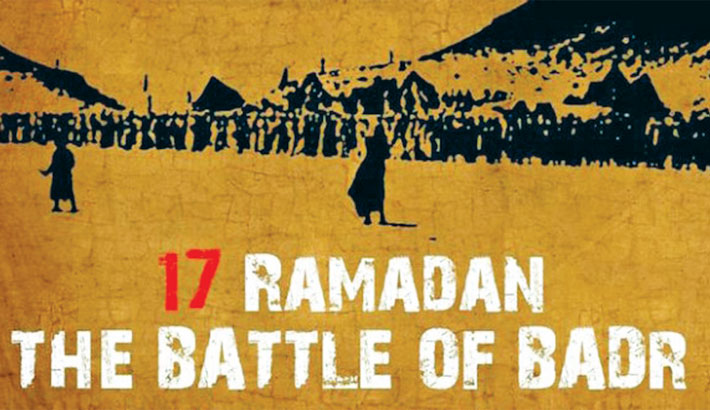 On the 17th day of Ramadan i.e. on May 23, 2019 falls the majuscule Al-Badr Day and on this day of 1400 years back, the Battle of Badr, the first major battle between the Muslims under the leadership of Prophet Muhammad (pbuh) and Quraish, the most powerful tribe in Makkah happened. The battle ended with a decisive victory for the Muslims. This victory was important in Islamic history because it gave the Muslims a boost in morale. This battle was also significant because it established the Muslims as a formidable force in Arabia.

The importance of this battle in the history of Islam continues into the present day. In fact, several military operations in the last five decades or more were named after this battle because it signifies victory. “Operation Badr,” for example, was used by the Egyptian army in 1973. Thus, the Battle of Badr is an important event in the history of Islam and continues to have relevance for Muslims everywhere.

Jamaat-e-Islami (JeI) people in Bangladesh claim to be Muslim. But look at their temerity? Snubbing the holy spirits of the Al-Badr War led by Muhammad (pbuh) against the mighty Quraish tribe, these amoral lineaments of history took the holy name of Al-Badr and constituted a horrendous Al-Badr force only to do all kinds of unholy acts in the soil of Bangladesh in 1971 and bedaubed a symbol of disgrace or infamy to our holy religion - Islam and the holy Prophet Muhammad (pbuh).

Samir Horn said, “You know that the Qur’an says that if you kill an innocent person it's as if you've killed all mankind?” But the Pakistani rulers in collusion with Al-Badr force were brutal to the Bengalis in Bangladesh in 1971. The crimes committed by the rulers of Pakistan and their mango-twigs – Al-Badr force were undeniably egregious during that time.

It is outrageous that the Al-Badr force volitionally became the paramilitary wing of the Pakistani Army during 1971 war. They originally belonged to Jamaat-e-Islami that collaborated as traitors with the Pakistan Army against the Bengali nationalist movement in the Bangladesh Liberation War of 1971. The chief of the Jamaat, Maulana Motiur Rahman Nizami who was hanged for his grievous war crimes in 1971 in the past, headed the Al-Badr organisation.

This beastly Nizami was also the all-Pakistan based Commander in Chief of this mass murdering outfit during the 1971 War. This killing squad was banned by the independent government of Bangladesh, but most of its members had fled the country during and immediately after the War of 1971 and many of the mass murderers also went into hiding in the remote hamlets of Bangladesh taking chance of the disarray in the war ravaged country.

It became very clear that they had blueprints marked by deep ill will; and deliberately harmful that was clearly not in alignment with the Prophet's Sunnah or the Prophet's prescription of what constitutes a legal bearing for a moral or spiritual or political goal. Wearing gussied up Muslim identity, their utter bestiality towards other humans in Bangladesh is unfathomable to believe.

The Al-Badr force was formed in 1971 to detect the freedom fighters of Bangladesh and to act as guides as well as co-fighters with the Pakistani army to annihilate us. They collaborated with Pakistani army as they were familiar with the local terrain of Bangladesh. The Al-Badr force was composed of mostly university, college, madrasa students-teachers, Bengali supporters of Jamaat-e-Islami, Muslim League and Muhajirs/Biharis who came from non-Bengali parts of India.

There were three types of Paramilitary forces that the Pakistani military junta formed:

i). Al-Badr: The Bangla-speaking Muslim students from Colleges, Universities and Madrasas, who were directly loyal to Jamaat-e-Islami;

ii) Al-Shams: Bengali Madrasa students, teachers and supporters of the so-called Islamic Parties other than Jamaat-e-Islami (these smaller parties included Nejam-e-Islami and various factions of the Muslim League); and

iii) Razakars: Some Illiterate and very poor Bengalis and refugees (who were paid a small amount of money as salary by the Pakistani military junta) who came from the various parts of India during separation of India and Pakistan in 1947, and settled in  the-then East Pakistan.

During that time, Bangladesh’s Al-Badr force was a very organised and trigger-happy para-military force among those three forces; and they had their own hierarchy of organisation and reporting system. They were assigned a variety of combat and non-combat tasks including:

a) Taking part in the operations;

b) Spying against the Freedom Fighters;

d) Working as the guides of the regular Pakistani Army;

f) Detecting and killing the Freedom Fighters; and

It is absolutely true that Al-Badr is an unequivocal, direct offspring of Jamaat-e-Islami, a killing outfit of Pakistani Army, and it was created to facilitate mass-murder and various war crimes in support of the occupying Pakistani army in Bangladesh in 1971.

On 16 December 1971, Pakistan’s Army surrendered. Members of Al-Badr, Al-Shams along with Razakar, and the Shanti Committee also surrendered. The Bangladesh government treated them as traitors, arrested many of them for lawful prosecution. Many of the Al-Badr members were rightfully brought to justice by the independent government of Bangladesh. However, a large majority of them escaped any form of legal prosecution and are currently enjoying great prosperity in the country because of deliberate patronising by the rogue military rulers like Zia and Ershad, despite widespread disapproval from the general population after the brutal assassination of Bangladesh’s founding father Bangabandhu Sheikh Mujibur Rahman and four national leaders on August 15 and November 3, 1975 respectively.

The Battle of Badr laid the foundation of the Islamic State and made out of the Muslims a force to be reckoned with by the dwellers of the Arabian Peninsula. But the newfangled Al-Badr force emerged in Bangladesh in 1971 as an anti-Bangladesh paramilitary force which operated in the country against Bengali independence during the Bangladesh Liberation War, under the patronage of the Pakistani government with all their ferocities. Al-Badr’s tactics were terrorism, political and civilian killings and they operated under Pakistani military command.

They perpetrated atrocities against civilians during the war of 1971, in particular, the massacre of intellectuals in Dhaka that occurred on 14 and 15 December 1971. They then dumped the decomposed bodies in the Rayer Bazar area of Dhaka city. Bennett’s words are pertinent here, “Punishment can do a lot for criminals, and send a message to the rest of society.” And so, the leaders of Al-Badr force, Motiur Rahman Nizami, Kader Mollah, Kamaruzzaman, Mir Quasem Ali, and Ali Ahsan Mohammad Mujaheed were convicted of war crimes and executed lawfully.

SQ Chowdhury belonged to former Convention Muslim League of Pakistan and later on belonged to BNP, was convicted of war crimes and executed lawfully. In a nutshell, they were worst criminals of war and their execution was a lesson to oppressors. Al-Badr leaders, Ashrafuz Zaman Khan and Chowdhury Mueen-Uddin were convicted of war crimes lawfully and they are now on the run in the safe havens of UK and USA under the cloak of so-called human rights and freedom of speech in those advanced and sophisticated countries. The famed freedom fighter Syed Shahidul Haque Mama and the Chief of Mama Bahini during 1971 War correctly pronounced, “Among infamous traitors of history one might mention these cruel beasts.”

The Al-Badr force during our glorious Liberation War in 1971 in Bangladesh became ferocious criminals. They butchered three million of our unarmed civilians in collaboration with the Beelzebub- the Pakistani soldiers pronouncing the holy words, “Naraye Takbir, Allahu Akbar; Pakistan Zindabad; Pakistan is the holy place of Islam.” They then refused the burial of those dead bodies. Rather, they cheerfully allowed the vultures, jackals, dogs and other flesh eaters to eat those murdered and mutilated bodies. How disgusting their irremissible temerities!

But we were fighting a just cause. The signs of victory of the Freedom Fighters (FFs) began to appear soon during our glorious Liberation War. The enemies were stricken with terror and began to flee. The FFs, who were fighting with the help of their faith, and knew that killing and being killed were blessings of Almighty, were perfectly undaunted and nothing stopped their advance. The forces of truth versus falsehood and good against evil faced each other and Bangladesh was born in 1971. The truth was victorious and falsehood was defeated.

The majuscule Al-Badr Day shall remain as sanctum in its place as it was, but the billet of rogue elephant Al-Badr force of 1971 shall be the outfall at a far-off grime place.

The writer is a senior citizen and writes on politics, political and human-centred figures, current and international affairs