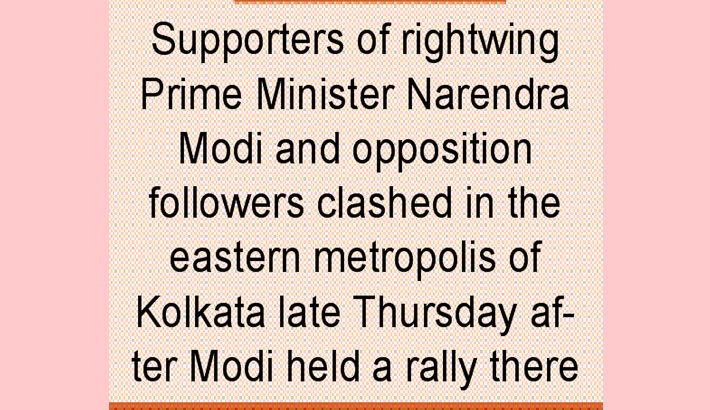 KOLKATA: Police made new arrests following clashes and poured thousands of security forces into the eastern city of Kolkata on Friday as tensions mounted ahead of the final round of voting in India’s marathon election, reports AFP.

Supporters of rightwing Prime Minister Narendra Modi and opposition followers clashed in the eastern metropolis late Thursday after Modi held a rally there.

It was the second night of street battles between activists of the ruling Bharatiya Janata Party (BJP) and the regional Trinamool Congress (TMC) this week.

Police said at least 26 arrests were made on Friday over the latest unrest as they bolstered security before Sunday’s voting.

India’s six-week election ends on Sunday with the seventh round of voting in eight northern states, including West Bengal, where Kolkata is the capital.

With Modi seeking a second term, but scrambling to hold on to his overall majority, the results will be announced on May 23.

Modi’s BJP has been aggressively campaigning in West Bengal, hoping to making gains from the TMC, which controls the state, to make up for losses expected in other states.

An official election observer, speaking on condition of anonymity, said there have been more than 300 incidents of poll violence across West Bengal since campaigning started on April 11.

“Kolkata will witness an unprecedented deployment of security forces before Sunday,” the official added.

Tens of thousands of troops and paramilitaries were expected in the city of 4.5 million people during the weekend.

Campaigning for the election was ended a day early in West Bengal because of the troubles and the sale of alcohol in Kolkata is now banned until after voting.

Bars in the Park Street entertainment district were closed on Thursday night.

The final day of voting will also be held in the key states of Uttar Pradesh, including Modi’s constituency of Varanasi, Punjab, Madhya Pradesh, Bihar, Jharkhand, Chandigarh and Himachal Pradesh.

The BJP won 282 seats of the 543 at stake in 2014, in one of the biggest landslides triumphs in India’s post-independence history.