Passenger sheds by name only ! 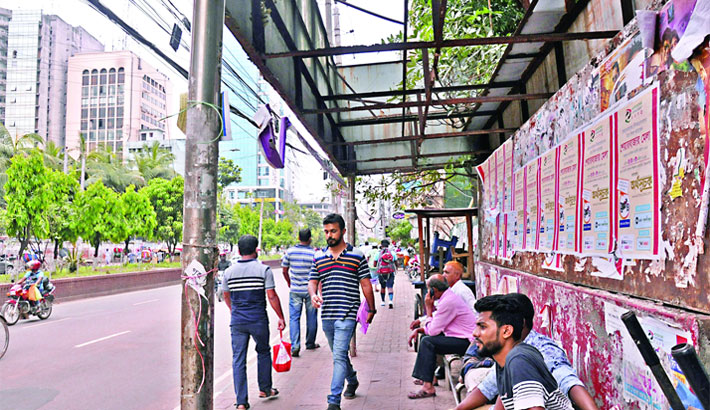 The passenger shed at Dainik Bangla intersection in the capital lies in a sorry state due to lack of maintenance. The photo was taken on Wednesday. – Reaz Ahmed Sumon

Commuters in the capital suffer during the sunny or rainy days around the year as many passenger sheds along the roads in different parts of the city are in a terrible state.

Some strategic points in the city also do not have any passengers shed to take refuge in inclement weather.

Besides, a number of passenger sheds have been built in wrong places where commuters do not need any refuge.

Passenger sheds are built near bus stops or terminals to provide shelters to passengers, but most of these sheds are being used by hawkers and vendors due to lax monitoring by the authorities concerned.

Some commuters alleged that many sheds in the city are located in wrong points where commuters need not wait for bus.

As a result, commuters find no option but to stand on the pavements or footpaths while waiting for transport.

This correspondent found the passengers shed in front of Bangladesh Institute of Glass and Ceramics in Tejgaon area in the city in a bad  state.

Another shed on the western side of Central Medical Stores Depot (CMSD) was found broken and dirty.

A passenger shed in the city’s Dainik Bangla area was found in awful condition.

A passenger shed in city’s Purana Paltan area was found occupied by the book sellers and vendors. Another shed in Dhanmondi-2 was made makeshift food shops.

It was seen that vendors were busy selling at the shops occupying footpaths while passengers were waiting for buses on the main streets.

It was also seen in the road stretching from Farmgate to Shahbagh that there is a passenger shed in Shahbagh, but there is no shed in Banglamotor area. However, all the buses stop there at regular intervals.

Although there is a shed between Karwan Bazar and Farmgate, the bus does not stop there. As a result, the passengers are not benefited from the shed.

Shajahan, who is waiting for bus at New Market area, told this correspondent: “You can see that all the buses stop here but there is no shed for the people.”

In many areas in the city, permanent shops have been built inside the passenger sheds, but no steps have been taken by the city corporation authorities to remove these illegal establishments.

There are signboards of bus stop in front of every shade, but no bus stops there. Rickshaws and motorcycles are seen parked there.

A bus driver said bus stop and passenger shed have been built far away from the intersections. As a result, passengers do not stand at the bus stops.

“We are bound to take passengers from the road as they are not available at the bus stops,” he added.

On the other hand, passengers alleged the buses do not stop at bus stops. “We can’t get on the bus if we don’t stand at the intersection. We are bound to get in bus with risk on the roads.”

DNCC sources said there are 129 passenger sheds in DNCC area. Of those, 114 were allocated from the city corporation. Roads and Highways department, BRTC and other organizations have 15 passenger sheds.

According to the DSCC sources, after the city corporation split, there were 86 passenger sheds in the DSCC area.

Recently an initiative was taken to build 130 passenger shelters. Of those, 70 passenger sheds were built in Dhaka South and 60 in North City as per the demand of Dhaka Metropolitan Police (DMP).

Two city corporations of Dhaka have started building 50 passenger-sheds in the city.

“We are going to build 40 bus stops along the passenger sheds. We have already started construction work. Construction works of 20 stops have almost been done,” Rajib Khadem, Executive Engineer of Traffic Engineering Department of DSCC, told daily sun.

In light of the list, they started construction of eight bus stops and passenger sheds in the Notun Bazar and Mirpur areas.

The other places in the list are being checked for construction of passenger sheds and bus stops, he added.