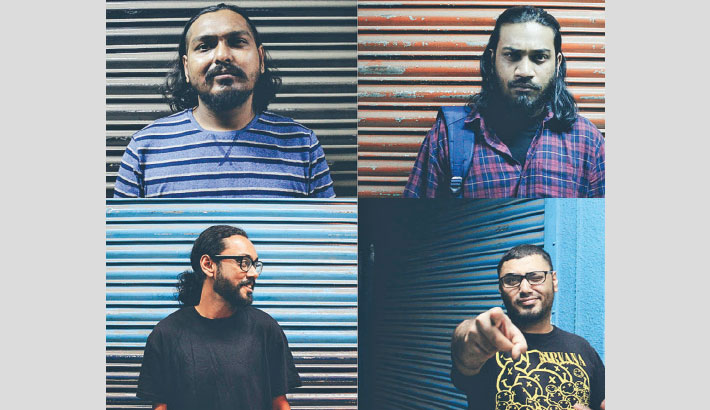 Nothing can be hotter than this scorching season. However, there is one thing that is truly hotter, only in all the good ways. That is the band ‘Owned’! Consisting of Ratul on vocal and bass, Samee on drums, Fasih and Pritom on guitar and Najibur as the band manager- this band truly does not cease to melt our hearts! Their journey began over a decade back and ever since then, something about the band had always attracted us towards it. They had singles released in various mixed albums such as “Niroporadh” in REPUBLIC (2011), “Scissorhands” in ROCK 707 (2011) and “Shopnodorshi” in HATIAR (2012) while their debut album “Owned 1” was released in June, 2014. The album bonded well with the listeners.

You really can’t throw this band into a certain box of genre. One simply has to flow in with the songs, the lyrics and the music. It is, of course, rock in its roots. The second album, unsurprisingly called “Owned 2”, came out in August, 2017. “The reason we never really care for names is because we are far more into the music than the technicalities,” said Pritom. He is absolutely right. The only way to get the music of the band ‘Owned’ is to listen to it, savour it, abstract the flavours and not really worry about the album title or the genre classification and other technicalities.

It all began back in 2007. Samee and Ratul are brothers. “I learnt drums from Turjo and thought why Ratul doesn’t learn guitar. But he ended up picking up the bass guitar instead,” said Samee. Their first show, organized by Incursion, was held that year. “We are really grateful to Saadi for giving us the platform.” Since then the lineup had changed a few times but the current one is in full swing since 2012. This is the lineup that had created both the albums of ‘Owned’. Samiul was the keyboardist of the band for some time but he had to leave for some personal reasons.

Owned had witnessed the time before and after technology took over us.

“At that time, there was no internet or Facebook. People had a different craze for concerts and music. AmaderGaan and TunesBd gave updates about our concert. Things were certainly different back then,” said Fasih. “There are virtues too. We are now definitely reaching out to more people through Youtube and social media.”

Owned’s recent track ‘Bondi’ was viewed nearly 45,000 times in less than two months! Interestingly, the last instrumental of the track was done before the first. It was something totally unplanned in the beginning but became extremely powerful when the members sat together and decided to give life to this song. The lyrics are written by Zakir Hossain while the video was directed by Shahriyar Rahman . “Different people can interpret the song in different ways. It’s something like modern art- how you interpret it. The song could mean the trap of relationships or it could mean anything else,” said Pritom.

That’s the best thing about ‘Owned’. They do what they do for the love of music and people simply love it! “Owned does music to satisfy the thirst in our souls- not for popularity, not for gains or anything,” said Ratul. “If people love our songs, that’s great. If they don’t, that’s great too! Most of our songs are about our daily lives, everyday problems and so on. As life changes, you will see our songs change too. Our first album was very dark. When we listen to it now, we wonder what we were going through!”

“While we have great days now, things were not always like this. I remember times when 8 of us travelled in the same taxi cab because we couldn’t afford another. We used to lend processor, even on the concert day. Sometimes we didn’t even know if someone will lend us a processor or not for the gig. We just showed up. Thankfully, those days of hardship are now memories we fondly recall,” reminisced the band members. Another interesting fact about the band is their annual solo show on the fifteenth floor of their den where they play 15- 20 songs. The band is also working on a documentary ‘Owned Behind The Years’ that will have all the tidbits from the first line up till now.

So where will you find their songs? It’s all in their website www.ownedtheband.net. And how much do you pay? The biggest surprise is there. The band says you get to decide. “If you feel the album should be free, it is right there for you. Similarly, if you feel, for example, that the album is worth 5 million dollars to you, or if you feel that the album is worth 10 taka, regardless of the amount you pay, it would mean the world to us.”