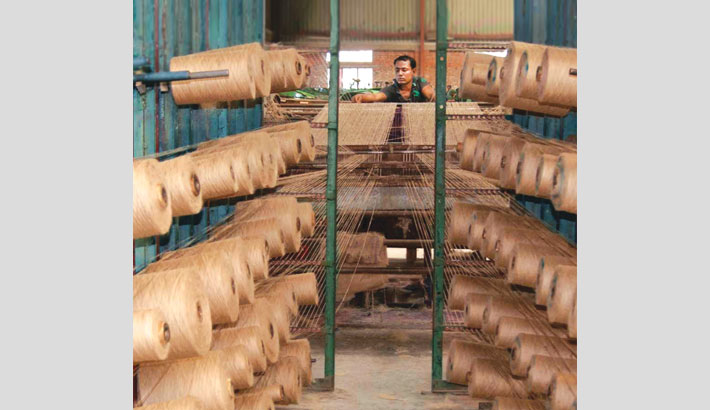 Once jute was considered as the ‘golden fibre’ of Bangladesh as we used to earn a good amount of foreign currencies from export of jute and jute-made goods. Though jute was very much in use in Africa and Asia since ancient time, it was the British East India Company, the delegate of the British Empire Authority in India, who had first exported jute from the Indian sub-continent. During 1830s, when the Dundee spinners learned how to spin jute yarn by modifying their power-driven flax machinery, the business reached a new height. Later owing to an abundant supply of labour and raw materials, the first ever jute mill was established in 1855 in India. Gradually they established many mills in the then Bengal province as more than two-third of the total produced jute were grown in the Ganga basin located in this region. In the following several decades, the jute industry in India enjoyed even more remarkable expansion. These mills alone were enough to meet the world demand. Due to such huge demand and its economic contribution jute came to be known as ‘golden fibre’. However after the partition of India, several Pakistani families, mainly from West Pakistan, came to the jute business by setting up several jute mills in Narayanganj of the then East Pakistan and were doing business quite well. After the liberation of Bangladesh from Pakistan in 1971, the government initiated a programme of nationalisation of large manufacturing enterprises and as part of this programme most of the Pakistani-owned jute mills were taken over by the government of Bangladesh. And it is widely believed that since then the golden fibre of Bangladesh started losing its shine. The invention of polythene and its widespread use around the world actually shook the very foundation of this industry. There are allegations of mismanagement and wrong policies as well. As a result when the private jute mills and factories are doing good business and making profits, the state-run factories are still incurring loss.

There are indeed many reasons behind such downfall of the state-run jute mills. The lack of product diversification to suit the changing needs of the market, dishonest and unskilled management, over-employment of local unskilled labour, too much corruption in export and purchase department, procurement of low-quality raw jute in the off-season, lack of modern mechanical instruments and the government’s holistic failure to properly handle the jute mills are the most notable reasons.

It is true that after the nationalisation of the jute mills there was initially a scarcity of skilled manpower. Though it was expected that they would become skilled after getting necessary experience, it is unfortunate that it did not happen so. And as there is a lack of skilled and qualified people in the state-run jute mills, they have utterly failed to cope with the changing situations of the world and consequently they are yet to diversify their productions. While the private mills are producing many new jute-made products including different kinds of bags, office items, household items, home textiles, decorative items, shoes, yarns and fabrics, pulp and paper and fashion accessories in accordance with the demand of the time, the state-run factories are still producing only those products which they used to produce in the 80s. They have failed to realize the fact that the production and marketing of jute bags and sacks only cannot ensure this sector’s stability and prosperity.

Moreover a greedy quarter with the help of unskilled management has turned this sector into a hub of corruption. Their corruption has spread out everywhere from manpower recruitment to buying raw jute. For example, when the government decided to reopen five jute mills in 2011, the Centre for Policy Dialogue (CPD) criticized the decision as they found many irregularities including recruitment of a large number of workers without any proper planning. According to CPD, at that time the government provided Tk. 1.05 billion (105 crore) and recruited 35,000 workers, among which 22,520 were without any work. In the meantime the jobs of about 90 per cent of BJMC’s 67,000 workers in its 26 mills were made permanent and these mills can produce only a third of their production capacity. In another survey, it has been found that in a government jute mill, 90 workers are required to produce one tonne of sacks, whereas 25-30 workers can do the same job in the private sector. But, interestingly the wages of workers are high in state-owned jute mills compared to the private sector mills. Apart from these, there is allegation that some corrupt officials of BJMC (Bangladesh Jute Mills Corporation) buy low-quality jute for making a quick buck.

Fund shortage is another problem and funds are not made available in time. Though the government provides huge financial support to mitigate loss of state-run jute mills, still there is allegation that BJMC does not get their allocation in time. As a result, due to cash crisis, BJMC has been failing to buy raw jute from the farmers at the harvest time and it has resulted in jute mills cutting production by around 66 percent. Although the government has repeatedly said that it is trying to restore the lost glory of the golden fibre, but trends suggest that it is providing lip service only. The BJMC sought Tk. 450 crore from the government until December last year to purchase raw jute but received only around Tk. 80 crore. On top of this, the corporation already owes raw jute traders Tk. 420 crore. Experts fear that the sector will suffer for the delay in procuring raw jute and farmers will also lose interest in growing it.

Last but not least, political instability and successive governments’ failure to handle this sector aptly have put the future of the state-run factories in jeopardy. Whimsical decisions by the consecutive governments have just worsened the situation. After the independence of Bangladesh the operations of 66 nationalised mills were put under the Bangladesh Jute Mills Corporation (BJMC). But after facing huge loss, in the early 80s thirty five mills were privatised, albeit market forces were still not allowed to guide the operation of the mills. In the 90s, the government focused again on the problems of jute sector. Through a restructuring programme, supported by the World Bank's Jute Sector Adjustment Credit (JSAC), the government put together a Jute Sector Restructuring Programme (JSRP) in 1993. The measures under the programme included closing the worst performing mills (9 out of 29) and privatisation of at least 18 of the remaining 20 public mills, retrenching 45 percent of labour force, and debt restructuring of about Tk. 35 billion. It was anticipated that at the completion of the reform programme, most of the jute mills would be in private hands. However, political instability in the following years stalled the reforms. Debt restructuring, loss financing and labour retrenchment were implemented, but closure and privatisation of jute mills were put in abeyance. Later Asia’s biggest jute mill Adamjee Jute Mill was shut down in 2002 and five jute mills were again reopened in 2011 - all of these actually point to the indecisive attitude of the government regarding this sector.

Export of jute goods has risen significantly in the 2018-19 financial year compared to the previous fiscal year and global concern about climate change has opened up new opportunities for Bangladesh. Bangladesh must take advantage of these eco-friendly consumer trends in the world market with a view to reviving its moribund jute industry. But to do so, the government must, first of all, address the problems with due importance and act accordingly.