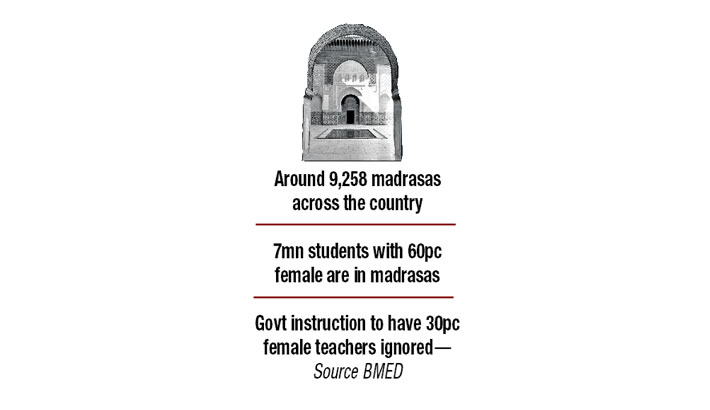 Amid the involvement of teachers in a series of rapes and killings of madrasa students, experts have called for strict monitoring by the government and overhauling the education system, reports UNB.

They told UNB that the recent incidents are a wakeup call for the government which needs to act fast to address the issue.

Three madrasa students were killed and at least seven others, mainly children, were raped by their teachers since April 1, media reports show. Fourteen madrasa teachers were arrested for their suspected involvement in the incidents.

The murder of Nusrat Jahan Rafi in Feni has drawn the attention of all as she was set on fire on April 6 at her madrasa for reportedly refusing to withdraw a sexual harassment case filed against her principal.

Chairman of Bangladesh Madrasa Education Board (BMED) Prof AKM Saif Ullah said the incidents are tarnishing the image of madrasas. BMED has issued a set of guidelines to protect female students and prevent sexual harassment.

Male teachers will not be allowed to call a female student alone to their rooms. "If they do, then other teachers, including female ones, must be present there," he said.

Madrasa authorities must also arrange a monthly meeting with students to allow the latter talk about their problems. The institutions will have to communicate sexual harassment complaints to the Madrasa Board immediately.

"If this instruction is not followed, then necessary action will be taken to cancel the institution's MPO," Saif warned, adding that the guidelines will be sent to all the institutions under the board shortly.

Saif noted that many madrasas are not following the Education Ministry's instruction to have at least 30 percent female teachers. "We'll give [the madrasas] a warning and take effective steps to implement the instruction as soon as possible," he said.

There are two types of madrasa education system in Bangladesh -- Alia and Qawmi. While the first is regulated by the government, the latter is financed by donors and run independently.

Prof Serajul Islam said incidents are taking place regularly at madrasas, but many are not disclosing them fearing social stigma.

He said the government must properly enforce law and ensure exemplary punishment of offenders, apart from reforming madrasa education. The government also needs to ensure a strong monitoring of the educational institutions.

Prof Choudhury said guardians should make their children aware of sexual harassment and encourage them not to hide such incidents.

Prof Barakat, who conducted a research on madrasa education, said the incidents of sexual harassment and molestation of students by teachers is a very old problem.

"The government should deal with the issue with an iron hand," he said, adding that a social movement is also necessary to prevent sexual harassment.

Prof Barakat also suggested the government to be careful about picking managing committee members of madrasa and educational institutions. "Reform in madrasa education, especially the Qawmi one, is also necessary," he noted.

"They've lost their morality and deviated from the teaching of the Quran and hadith. They should be given exemplary punishment as a warning to others," he said.

He said madrasa management committees should monitor the teachers and interact with students and encourage them to lodge complaints. "Madrasa teachers should also remain careful about their colleagues."

Dr Mohammad Shahidul Islam, an associate professor of Dhaka University Arabic department, said he was shocked after hearing about the incidents of sexual harassment involving teachers.

"Teaching is a noble profession, but teachers are now deviating from their ethics and ideal," he said. "They should be given proper training and kept under watch by a governing body."

"We've already sent cautionary messages to all educational institutions. We'll take stern action if any sexual harassment allegation is raised against any madrasa teacher," she said.

The minister said a social awareness campaign is also necessary to make female students aware of their rights and the legal means they can resort to in case of any harassment. "We must enforce the law strictly to get rid of the problem," she noted.

Dr Dipu said research should be conducted to find out the reason behind the growing incidents of sexual harassment and address the issue.