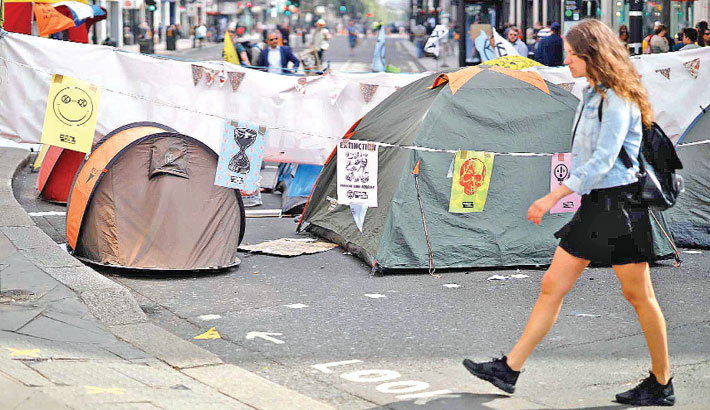 A pedestrian walks by the tents of climate change activists blocking a street at the Extinction Rebellion group’s environmental protest camp at Marble Arch in London on Monday, on the eighth day of the group’s protest calling for political change to combat climate change. Climate change protesters who have brought parts of London to a standstill said on Sunday they were prepared to call a halt if the British government will discuss their demands. —AFP PHOTO

LONDON: Some of London’s busiest streets re-opened Monday for the first time in a week as climate change protesters regrouped and plotted a new course after police made over 1,000 arrests, reports AFP.

The so-called Extinction Rebellion took over the heart of the UK capital in a bid to focus global attention on rising temperatures and sea levels caused by greenhouse gas emissions.

The grassroots group was established last year in Britain by academics and has used social media to become one of the fastest-growing environmental movements in the world.

But it abandoned four of the five main protests sites over the weekend in response to a more forceful police approach and an outcry from local businesses that claimed a heavy loss in sales.

London Mayor Sadiq Khan also warned Sunday that protests were starting to overstretch the police and limiting their ability to respond to daily crime.

“It simply isn’t right to put Londoners’ safety at risk like this,” Khan said.