Chelsea fight off Slavia to join Arsenal in Europa semis 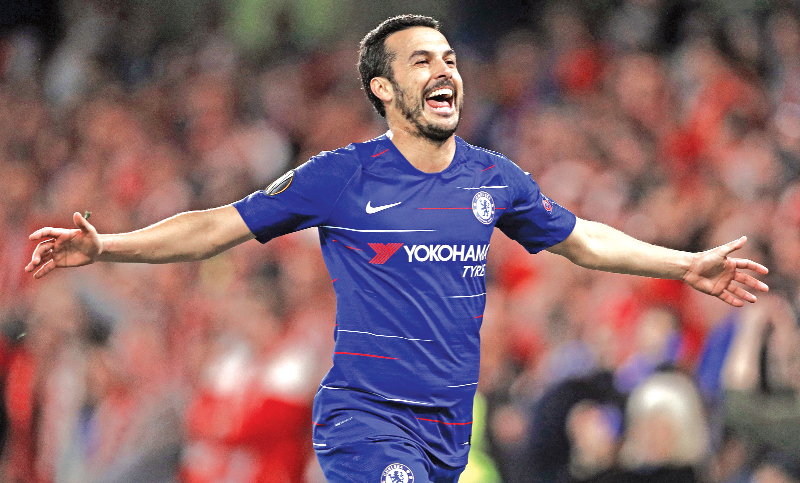 Pedro Rodriguez starred as Chelsea withstood a spirited Slavia Prague fightback in a wild 4-3 victory to qualify for the Europa League semi-finals on Thursday, while Arsenal knocked out Napoli after an assured display in Italy.

Leading 1-0 from last week’s first leg in the Czech capital, Chelsea appeared to be cruising towards the last four after an early goal blitz at Stamford Bridge.

Pedro struck the opener on five minutes before an unfortunate Simon Deli turned into his own net and Olivier Giroud added a third with barely quarter of an hour gone in London.

Tomas Soucek pulled one back for Slavia on 26 minutes, but Spain forward Pedro replied immediately to restore the Blues’ three-goal lead.

Maurizio Sarri’s side were made to sweat though as two sublime, quick-fire goals by Petr Sevcik just after half-time gave Slavia hope of an incredible comeback with 35 minutes still to play.

Chelsea eventually saw off the threat to progress 5-3 on aggregate despite an unconvincing second-half display.

“We have been efficient up front and solid at the back but we dropped our intensity after the break,” Giroud, who scored his competition-leading 10th goal, told BT Sport.

The 2013 Europa League champions will meet Eintracht Frankfurt in the last four after the Germans eliminated Benfica on away goals.

Eintracht lost 4-2 in Portugal a week ago, but goals by Filip Kostic and former Bayern Munich midfielder Sebastian Rode sent the German Cup holders through at the Commerzbank Arena.

In Italy, Alexandre Lacazette drilled in a terrific free-kick on 36 minutes at the Stadio San Paolo as the Gunners completed a 3-0 aggregate victory over Carlo Ancelotti’s Napoli.

Petr Cech denied Jose Callejon with his legs following a rapid Napoli break on the quarter-hour as the Italians sought to overturn a two-goal deficit from the first leg.

But Lacazette’s 30-yard drive all but put the tie beyond Napoli, shortly after Aaron Ramsey hobbled off with a hamstring injury — potentially his final appearance for Arsenal ahead of a move to Juventus in July.

“We came here with ambition and wanted to win and score some goals. We did it with Laca,” Arsenal captain Laurent Koscielny told BT Sport.

Arsenal boss Unai Emery will come up against one of his former clubs Valencia, the 2004 UEFA Cup winners, for a spot in the final.

Valencia eased through with a 5-1 aggregate win over Villarreal in an all-Spanish affair.

The semi-finals will be played over May 2 and 9, with this year’s final in Baku on May 29.