Rouhani calls on Mideast states to ‘drive back Zionism’ 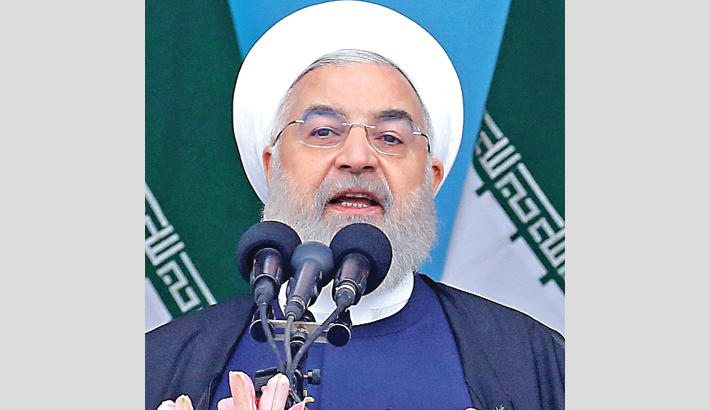 Speaking flanked by top generals before troops began their annual march-past, Rouhani also sought to reassure the region that the weaponry on display was for defensive purposes and not a threat, reports AFP.

“The region’s nations have lived alongside each other for centuries and never had a problem... If there is a problem, it is caused by others,” he said in the speech broadcast live on state television.

“Let us stand together, be together and rid the region of the aggressor’s presence.”

Rouhani assured neighbouring countries that Iran’s armed forces are “never against you or your national interests” but are “standing against the aggressors.”

“The power of our armed forces is the power of the region’s countries, the Islamic world.” he said.

“If we have a problem in the region today, its roots are either with Zionism or America’s arrogance.”

Rouhani called on Muslim nations to band together and “restore the historical right of the nation of Palestine,” saying that “Zionism ... has been committing crimes in the region for the past 70 years”,

“The final victory will surely be with the righteous,” he said. The military parade was held next to the south Tehran mausoleum of the Islamic Republic’s founder Ayatollah Ruhollah Khomeini. It showcased some of Iran’s latest weaponry, including the domestically designed and manufactured Kowsar fighter jet, which was first unveiled last year.

US-manufactured Bell, Cobra and Chinook helicopters bought before the Islamic revolution of 1979 also took part in the air display. Diatribes against Israel are standard fare of official speeches in Iran, although some, such as a call by Rouhani’s firebrand predecessor Mahmoud Ahmadinejad for Israel to be “wiped off the map”, have triggered international condemnation.