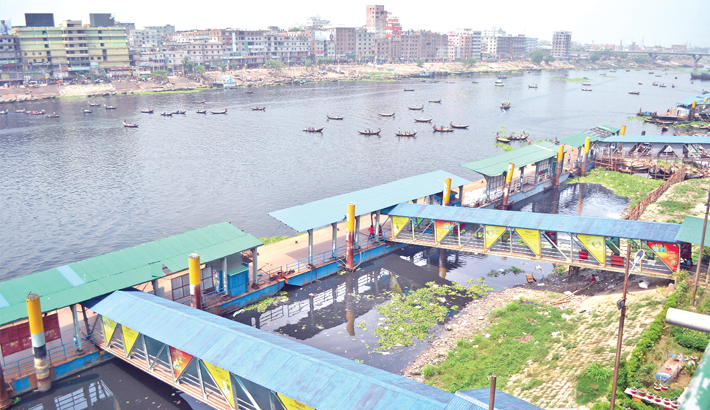 The launch terminal at Sadarghat in the capital looks desolate as river transport workers began a countrywide indefinite strike on Tuesday. – SUN PHoTO

The strike of water transport workers virtually paralyzed the river routes across the country on Tuesday.

No vessels were found leaving the Sadarghat terminal, a major river port that connects Dhaka with southern districts.

“Many passengers turned up at the terminal in the morning, but left it disappointed as no launches set out journey,” said Dinesh Kumar Saha, transport inspector in Bangladesh Inland Water Transport Authority.

The demands include the implementation of the 2016 wage structure fixed for the workers of passenger carriers, free food for all workers or food allowance, Tk 1 million in compensation for workers killed in accidents or in workplaces, appointment letter for all water transport workers and certification of master exam.

But the launch owners have decided to continue river services as they said the workers did not join a scheduled meeting with them to settle the wage dispute.

Some south-bound launches docked at the Sadarghat pontoon after vessel owners vowed to run their services in the afternoon.

“The workers are not having any discussion with the owners or the government. They even didn’t join the meeting at the Department of Labour on Monday,” he said.

The workers will continue their strike despite the owners’ decision to operate the water transport, said Mostafizur Rahman, captain of Mitali Launch.

“We’re continuing our strike. Some of the owners have initiated to operate the launches with workers and jobless captains,” he said.

The workers called the strike as the owners are not paying them in accordance with the wage structure fixed by the government, they said.