Bangladesh turns into a sea of colours on Pahela Baishakh 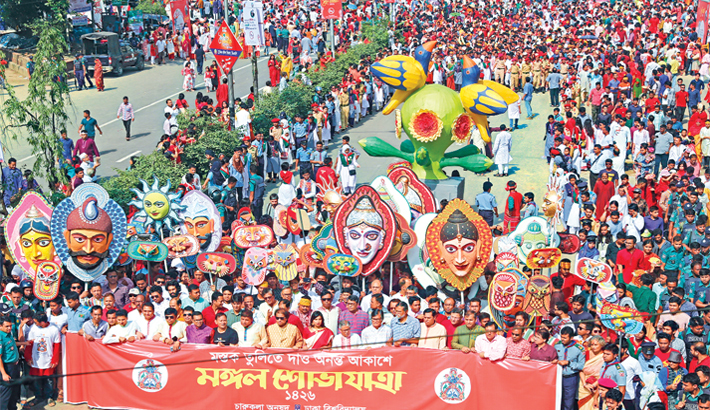 Thousands of people attend the colourful Mangal Shobhajatra brought out in the capital in celebration of the Pahela Baishakh on Sunday. The students of the Faculty of Fine Arts of Dhaka University organised the procession. – Reaz Ahmed Sumon

Men, women and children joined in droves the traditional parades and fairs across Bangladesh as they welcomed in the Bengali New 1426 also known as Pahela Baishakh, the first day of Bangla calendar, amid tight security.

They ignored calls by a section of Muslim clerics not to celebrate the day and like past years, remained firm to further this day which is a symbol of secularism and oneness.

The festivities began at dawn with the artistes from Chhayanaut, a leading cultural organization of the country, performed Tagore’s famous song ‘Esho hey Baishakh, esho, esho (come O Baishakh, come)’ under the historic banyan tree at the Ramna Park.

People from all walks of life gathered at different popular spots since dawn in capital Dhaka and elsewhere across the country as they marched with paper-made dolls and faces of birds or other animals. Many sang and danced wearing mainly red and white dresses as the chosen colours for this year.

Students of Faculty of Fine Arts of Dhaka University (DU) brought out Mangal Shobhajatra (procession for good )’ around about 9:00am on Sunday in the capital, as part of the festival and paraded through the university campus.

The procession ended on the DU campus after parading different roads via Shahbagh. However, no one was allowed to wear mask during the procession.

Before inaugurating the procession, the DU VC said: “Pahela Baishakh is a universal and non-communal cultural festival. The celebration of liberal, human values of this festival should remain in the hearts of people of the whole country.”

“This festival is not just a tradition to protect our heritage, but also motivates us to be human beings with greater values.”

“Many countries celebrate Baishakh like us. We hope the New Year will bring happiness, peace, and prosperity to everyone’s life,” the VC added.

Mangol Shobhajatra is a pride for the Bangalee Nation as the traditional procession on Pahela Baishakh has got the recognition of the United Nations Educational, Scientific and Cultural Organisation (UNESCO)’s as the Intangible Cultural Heritage of Humanity.

Bengalis at home and abroad enjoyed the traditional ‘panta-bhat (rice missed with water, chilly and salt)’ with fried Hilsa at their homes, restaurants and fairs following the rich tradition of Bangla culture.

Extensive security measures were in place in the city and elsewhere across the country for smooth celebration of the day.

Ramna Park and Suhrawardi Udyan areas were covered by CCTV surveillance while Police in uniform and plainsclothes were deployed in and around the parks.

Traders and shopkeepers across the country opened ‘Halkhata’ (new book of accounts) and entertained customers and visitors with sweets on the first day of the New Year as part of the tradition and culture.

Many foreigners also joined the celebrations. A large number of journalists from several countries, who are in Bangladesh as the guests of the government, also enjoyed the day.

Important buildings and establishments as well as city streets and islands were illuminated with colourful lights and graffiti have been painted in the walls signifying the arts, culture and heritage of the country.

At 8:00am on Sunday, there was a musical event of “Eso hey Baishakh,” organised by the DU Music Department. The DU VC inaugurated the program as chief guest at the Battala in front of the Arts Building on campus.

The traditional Mongol Shobhajatra were brought out at divisional, district and upazila levels as it has earned the international recognition

Various education institutions including the North South University, Bangladesh University of Professionals (BUP) and others organised separate programmes to welcome the New Year.