Is Rajinikanth’s Darbar poster a rip-off of Schwarzenegger’s Killing Gunther? 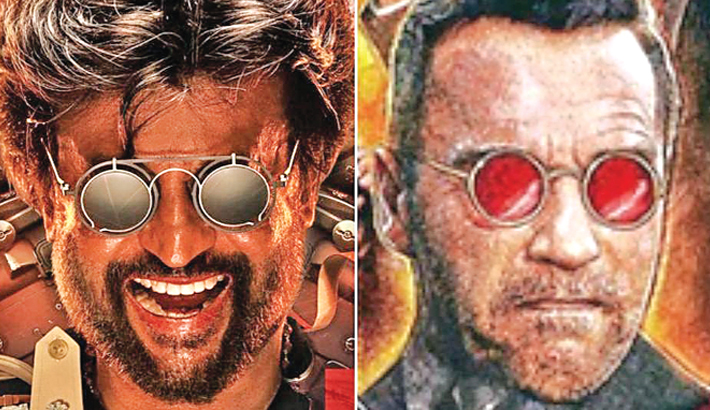 Rajinikanth and Arnold Schwarzenegger on the Darbar and Killing Gunther posters, respectively.

Twitter thinks that the newly released poster for Rajinikanth’s upcoming film Darbar has been plagiarised from Arnold Schwarzenegger’s Killing Gunther. The graphic designer of the Darbar poster has issued a clarification.

According to India Today, designer Vinci Raj said that ‘it feels bad’ when someone accuses him of plagiarism. He said, “After Kaala and Kabali, I am fortunate to work with Rajinikanth sir for the third time. I am a huge Superstar fan. When I get a special opportunity like this, I know how responsible I need to be. I wanted to give my best for Thalaivar. I know how honest I was while creating this poster, it feels bad when someone says that I have copied the design from another poster.”

Both the Darbar and Killing Gunther posters show the stars wearing similar sunglasses, framed in the centre, surrounded by guns and other miscellaneous objects.

Pointing out the similarities, one person tagged Killing Gunther director Taran Killam on Twitter and wrote, “Dude @TaranKillam , you will ask poster look copyright?” Another person began a Twitter poll, asking users to vote for which poster they think is better. Vinci Raj in a Facebook post shared his ‘inspirations’ for the poster design. He cited an older look of Rajinikanth’s and the skull and crossbones symbol.

Interestingly, Arnold was approached to star in Rajinikanth’s 2.0, in the role that eventually went to Akshay Kumar. It was reported that the Hollywood actor would receive a Rs 100 crore paycheck for the part. Director Shankar in an interview to Hindustan Times said, “We had detailed talks (with Arnold). He had even allotted dates and everything was set. In fact, when I met him, Arnold said that he had watched Robot twice. He also play-acted the way Chitti fired multiple machine guns in Robot. He showed a lot of interest to do the movie but when it came to the contract, things didn’t work out because the format of contracts in India and US are totally different. Then we decided to go with an Indian star/actor.”

To be entirely shot in Mumbai, the film will mark the return of Rajinikanth in a cop’s role after 25 years. He was last seen as a cop in Tamil film Pandian (1992).