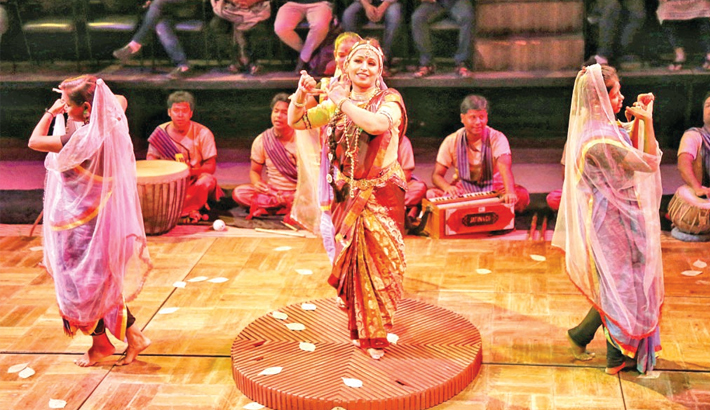 Two stage shows of popular theatre troupe Swapnadal’s much acclaimed production Chitrangada will be held at the studio theatre hall of Bangladesh Shilpakala Academy at 05:00 pm and 07:00pm respectively on April 14 to mark the Pahela Baishakh, the first day of Bengali calendar.

Chitrangada, based on an epic story from the Mahabharata, has been written by Nobel laureate Rabindranath Tagore when he was 31 years old.

Zahid Repon will direct the play, which is the 57th production of the theatre troupe.

The story of the play begins with Chitrangada, a princess of Manipur.

An expert in warfare, Chitrangada has no intention to lead the life of a common lady. But fortune frowns on her. Being acquainted with Arjun, Chitrangada, the legendary princess in the epic Mahabharata, falls in love with him who is in his 11th year of exile.

As a Brahmachari, Arjun refuses her love. Another reason for refusing her may be she is not so beautiful.

Brokenhearted, Chitrangada, who is also termed ‘Kurupa’, prays to Madan, the god of love, for beautifying herself. Impressed with her prayer, the god of love blesses her with a new formation, granting a beautiful appearance as ‘Shurupa’ for a year so that she can impress Arjun. Seeing her dazzling beauty, Arjun falls in love with the transformed princess. Thus, the story reaches its climax when Arjun feels a dire urge to meet the Kurupa form of Chitrangada for her bravery.