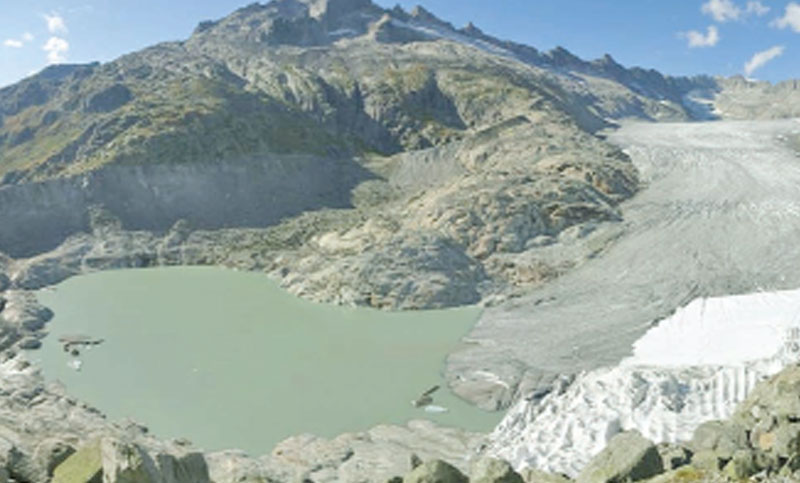 Two-thirds of the ice in the glaciers of the Alps is doomed to melt by the end of the century as climate change forces up temperatures, a study has found.

Half of the ice in the mountain chain’s 4,000 glaciers will be gone by 2050 due to global warming already baked in by past emissions, the research shows. After that, even if carbon emissions have plummeted to zero, two-thirds of the ice will still have melted by 2100, reports The Guardian.

If emissions continue to rise at the current rate, the ice tongues will have all but disappeared from Alpine valleys by the end of the century. The researchers

said the loss of the glaciers would have a big impact on water availability for farming and hydroelectricity, especially during droughts, and affect nature and tourism.

“Glaciers in the European Alps and their recent evolution are some of the clearest indicators of the ongoing changes in climate,” said Daniel Farinotti, a glaciologist at ETH Zurich in Switzerland and one of the research team.

“In the pessimistic case, the Alps will be mostly ice-free by 2100, with only isolated ice patches remaining at high elevation, representing 5% or less of the present-day ice volume,” said Matthias Huss, a senior researcher at ETH Zurich.

In February, a study found that a third of the huge ice fields in Asia’s towering mountain chains were also doomed to melt because of climate change, with serious consequences for almost 2 billion people downstream.

Glaciers along the Hindu Kush and Himalayan range are at higher, colder altitudes, but if global carbon emissions are not cut, two-thirds of their ice will melt by 2100.

Melting glaciers contribute to rising sea levels, but almost three-quarters of this water comes from Greenland and Antarctica.