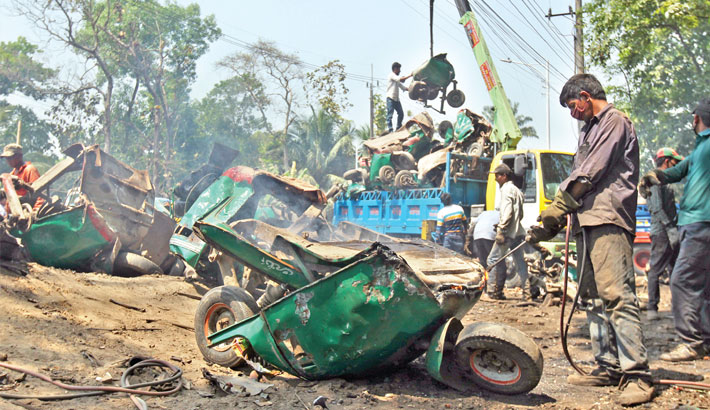 The initiative taken to scrap some 5,400 outdated CNG-run auto-rickshaws is going on at a snail’s pace in Chattogram, thanks to reluctance of the drivers and owners.

Sources said the Bangladesh Road Transport Authority (BRTA) started scrapping the outdated vehicles produced in 2003 on March 4 with a plan to dismantle at least 100 vehicles every day.

But, turnout rate of the vehicles for scraping is very poor as only 107 vehicles out of the total scheduled 400 could be dismantled over the first four days of the initiative, they said.

The BRTA has been keeping away the cylinders of these vehicles after releasing gas from them so that these expired cylinders cannot be used further.

The concerned officials blamed reluctance of the drivers and owners of the outdated vehicles as one of the main reasons behind the low turnout.

However, they warned strict actions against the vehicles which will not abide by the directive of the BRTA in this regard.

Auto-rickshaw driver Abdul Hannan, who came at the BRTA premises for dismantling his vehicle, said plying of any outdated vehicle on the streets is too risky as fatal accident may take place anytime.

Besides, a new vehicle can bag double income than old one, he said.

Asked about the tendency of flouting the BRTA directive, he informed that some owners think that their income source will be stopped if the vehicle is dismantled.

Meanwhile, the BRTA declared to issue registration for new vehicles against the old ones. But, only 70 auto-rickshaw owners applied for the registration till April 9.

When contacted, BRTA, Chattogram (Metro) Deputy Director (DD) Mohammad Shahidullah told the daily sun that though they had a plan of scrapping some 2,000 outdated vehicles by first 20 days, the target could not be achieved on different grounds including for reluctance of the drives and owners of the vehicles.

He, however, claimed that rate of the low turnout has been increasing with the passage of time.

DD Shahidullah informed that new dates will be fixed if the targeted vehicles can’t be scrapped within the schedule.

Asked about the number of application for registration, he also blamed the reluctance of the owners for this situation.

Mentionable, BRTA also took initiative to scrap a total of 2,885 three-wheelers, which were manufactured in 2002, last year.

Some 101 vehicles of the total ones scheduled to be dismantled did not respond to the call of the BRTA, and even they are still plying through the roads.

Later, the owners were issued show-cause notices asking why they failed to bring their vehicles for scraping in due time, said the BRTA sources.

Of them, only 25 owners responded to the letters later, the sources said adding that new dates might be fixed for scrapping the vehicles.

On the other hand, among the dismantled vehicles, some 150 owners of the vehicles did not apply for registration of new vehicles after the BRTA conducted the drive last year.

BRTA Executive Magistrate Ziaul Haque Mir told the daily sun that they have been conducting drives on regular basis against the illegal vehicles.

“If the vehicles can be detained those will surely be sent for dumping,” said Ziaul.

Mentionable, the economic life of an auto-rickshaw is 15 years. Around 13,000 registered auto-rickshaws have been plying on the roads in the port city.