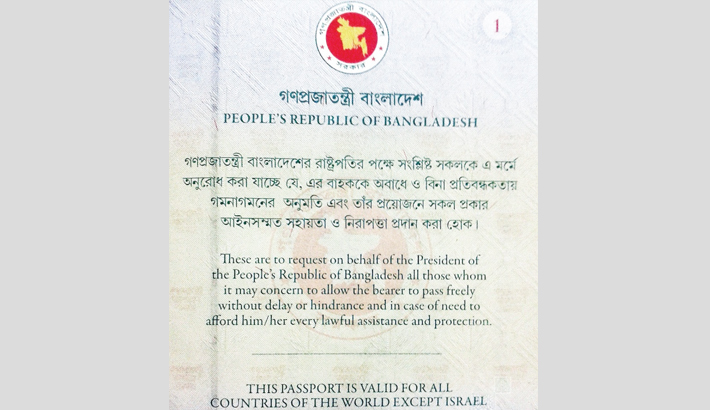 It’s time to change our relations with Israel and by that I mean it is time to develop diplomatic ties with Israel. Now hold one, before you call for my arrest or execution, let me explain why I am saying this.

Now you might ask, what about the Palestinians? It is important we continue supporting the Palestinian people and be vocal in our support for two nation theory. I am not asking for the dissolution of relations with the Palestinian people or reducing our support for a future nation state for them. I am asking for opening dialogue with Israel, I am asking for the development of relations with Israel and Israelis. You cannot have a voice if you don’t have a seat on the table. We cannot lobby for Palestine if we are not talking with the Israelis.

Let’s not have a separate standard for Israel. Israel is the not the only country in the world that is in control of disputed territory. Yet it is the only country that we are forbidden from visiting and the only country our passport explicitly excludes. We have not spoken about Morocco occupying Western Sahara or China carrying out genocide, yes killing a culture and religion of a people is genocide, against Uighur Muslims. If we can have relations with China, Morocco, Myanmar, or the Philippines; we can certainly have ties with Israel. We can develop relations with Israel while still advocating for the rights of the Palestinian people. In fact, we would be better advocates of Palestinian people when we have diplomatic ties with Israel. The recognition of Palestine and Israel are not mutually exclusive.

Israel was one of the first countries in the world to recognise the Independence of Bangladesh, which we promptly rejected. Jewish people in the United States and Europe have provided support and aid to migrant communities from Bangladesh. Jewish aid agencies prominently aid migrants and refugees, many of whom are Muslims. The parliament of Bangladesh was designed by a Jewish architect. Baghdadi Jews were once a thriving merchant community in Dhaka. Israel is the only Jewish country in the world and Bangladesh is the only Bengali country in the world. It would make sense to establish diplomatic relations with Israel to maintain and develop our relationship with the Jewish people.  Many of whom cannot visit Bangladesh as they hold Israeli passports. It certainly is not a welcoming environment when Bangladesh refuses to engage with the only Jewish country in the world.

There are many possible benefits to Bangladesh. Religious Muslims and Christians of Bangladesh would be able to go to pilgrimage to Jerusalem and Bethlehem. This was a benefit alluded by an Israeli government official. Israel has some of the best desalination technology in the world which can prove very useful to southern Bangladesh, where water salinity is on the rise. Israel today produces more water than it can consume. Israel can also be major destination for Bangladeshi garment exports. We can use the expertise of the Israeli technology industry in developing our own.

What about the other Muslim countries?  Well, Egypt, Jordan, and Turkey have diplomatic relations with Israel. All three of them recognise both Israel and Palestine. Beyond that, Israel and Saudi Arabia, and by extension gulf Arab countries, have developed an unspoken strategic alliance to counter Iran. Bangladesh is the third largest Muslim majority in the world and home to almost 10 percent of the world’s Muslims. Bangladesh establishing diplomatic ties with Israel will be an unprecedented move towards peace. It would help towards the normalisation of ties between Israel and the Muslim world. It has been more than 70 years since the founding of Israel, yet the majority of the Muslim majority countries have not established diplomatic ties with it. This certainly has not helped achieve peace in the region. Peace in the Middle East is still far from being achieved.It’s time for a new strategy. It would also help Israel in improving its ties with non-Arab Muslim countries.

Bangladesh has a policy of friendship to all and enmity to none, which should include Israel. It would be in keeping with our image of modern forward looking Muslim democracy. We should not have unfair moral standards only for Israel. Developing ties with Israel would be politically and economically the right thing for our country and most importantly it would be the right thing to do. There is no good reason to not have relations with only one country in the world. We are one of only 16 countries that don’t accept Israeli passports. It’s time to change that and engage with Israel.

The writer is a graduate student of Baruch College, USA

DISCLAIMER: Views expressed above are the author’s own.