Sanjay on working with Madhuri: The one scene we did together in Kalank was amazing 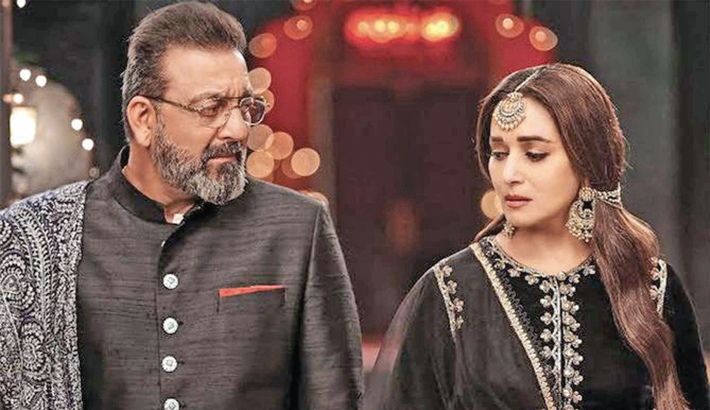 Actor Sanjay Dutt will be seen sharing the screen with his Khalnayak co-star Madhuri Dixit after a period of over 21 years in their upcoming film Kalank, reports Hindustan Times.

The film’s teaser gives glimpses of the two actors though not in the same frame. However, the actor has confirmed that they have a scene together and calls working with her an ‘amazing’ experience.

On being asked about how it was to work with her, Sanjay told DNA with a smile, “Working with her is a pleasure. What is the time frame that we hadn’t met or seen each other? Two decades, perhaps a little more. Madhuri is such a great actor. I’ve done many films with her — Thanedaar (1990), Saajan (1991), Khalnayak (1993), Mahaanta (1997)… I can’t even recall in one go. So, to work with her again in that one scene that we did together in Kalank was amazing.”

Calling her a matured actor, he went on to add, “She’s got that command as an actor. It’s a pleasure to share screen space with her after so many years.

So much has gone past, people have matured. She herself comes across as such a matured actor.”

Kalank is a complicated love story that also stars Varun Dhawan, Alia Bhatt, Aditya Roy Kapur and Sonakshi Sinha. Varun plays Zafar in the film who falls in love with Alia’s character Roop who eventually gets married to Aditya’s character Dev in the film.

Kalank also stars Kiara Advani alongside Varun in the dance number First Class. The film trailer hinted at another dance number as well featuring Kriti Sanon. Kunal Kemmu also has a prominent role in the film. The film has been directed by Abhishek Varman and is set to hit theatres on April 17.

Sanjay was last seen in 2018 film Saheb Biwi Aur Gangster 3 and has quite a few films in his kitty. He will now be seen in Ranbir Kapoor starrer Shamshera, Arjun Kapoor starrer Panipat, Mahesh Bhatt’s Sadak 2 and Bhuj: The Pride of India.

Madhuri was recently seen in Total Dhamaal which crossed the Rs 100 crore mark at the domestic box office.