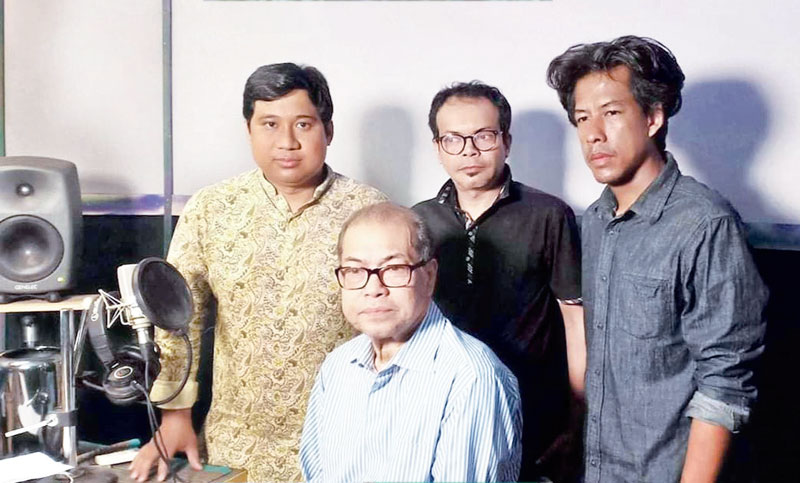 Subir Nandi has sung a new song in memory of Father of the Nation Bangabandhu Sheikh Mujibur Rahman. Written by Sujan Hajong and composed by Jadu Richhil, Sumon Kalyan has arranged the music of the song.

The song was recorded on last Saturday at D Station.

Talking about this song Subir Nandi said, “The present generation is very much ahead. In this age songs, poems and also films are being made on Bangabandhu Sheikh Mujibur Rahman. The song tries to emphasize that the Bengali people will always remember Bangabandhu for his self-sacrifice for his country, land and mother”.

Sujan Hajong said, “The image of Bangabandhu is eternal. Bangabandhu’s history cannot be wiped out. Through this song, I have represented the residence of Bangabadhu at Dhanmondi 32, his glasses with black frame, his easy chair and the rare picture of Sheikh Russel.

Though, the young generation might feel more motivated to learn the correct history about Bangabandhu.”

Sujan Hajong also said, it will be added into a mixed album named ‘Bangabandhu Tumi Swapna Bangalir.’ All the songs of the album have been written by Sujan. This album also featured vocalists from different parts of South Asia. The list includes Fahmida Nabi from Bangladesh, Nachiketa Chakraborty and Subhamita Banerjee from India, Ashra Kunwar from Nepal, Sangay Lhaden Tshering from Bhutan, David from Sri Lanka, Shalabee Ibrahim from Maldives.