Irrfan removes mask as he is spotted again in Mumbai 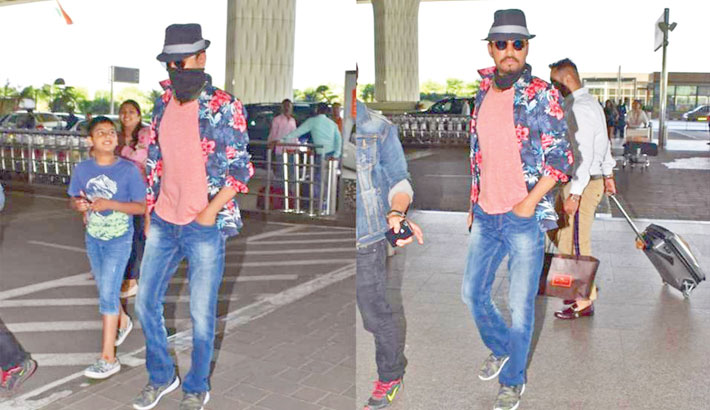 Actor Irrfan Khan was spotted again at the Mumbai airport on Thursday and appeared healthy. The actor, who was earlier keeping a low profile and sported a mask to cover his face in public, was seen uncovering his face in front of the paparazzi. Dressed in peppy casuals and a hat, Irrfan walked with confidence and also posed for photos, reports Hindustan Times.

Irrfan was undergoing medical treatment for neuroendocrine tumour in London and had returned to India in March. He is expected to begin work on Hindi Medium 2 but no official confirmation has come till now when the film will officially start shooting. Hindi Medium 2 is expected to be his first film post his return. Kareena Kapoor is said to be playing the female lead in the film, which will reportedly be shot in London. A source close to the actor had earlier told IANS, “She is playing the lead role in the film and might play a cop in it.”

According to an earlier report in Asian Age, a source has revealed, “While Hindi Medium was shot extensively in India, the sequel will be shot in the US. The story will revolve around the daughter, to be played by Radhika Madan, who travels to the United States for her higher education.”

The original Hindi Medium was directed by Saket Choudhary and released in 2017. Pakistani actor Saba Qamar had played the female lead opposite Irrfan in the film. It was based on India’s education system and Irrfan had won almost all the major awards for his performance in the film.

Irrfan had left for London in March last year and had shared the news of his illness on Twitter. He had tweeted, “The unexpected makes us grow, which is what the past few days have been about. Learning that I have been diagnosed with NeuroEndocrine Tumour as of now has admittedly been difficult, but the love and strength of those around me and that I found within me has brought me to a place of hope. The journey of this is taking me out of the country, and I request everyone to continue sending their wishes. As for the rumours that were floated NEURO is not always about the brain and googling is the easiest way to do research.To those who waited for my words, I hope to be back with more stories to tell.”