River cruise between Dhaka and Kolkata 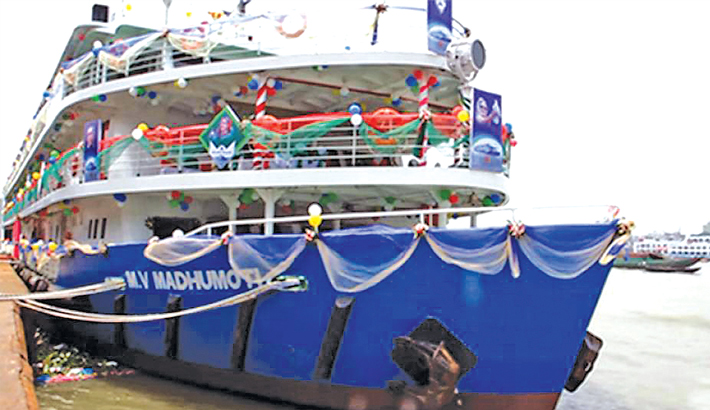 The first passenger cruise services between Dhaka and Kolkata was flagged off on Friday, March 29 from both sides. MV Madhumoti from Dhaka and RV Bengal from Kolkata were chosen to make the historic trip.

This is going to open a new vista for passenger transportation between the two countries.

Home Minister Asaduzzaman Khan Kamal inaugurated the Dhaka-Kolkata cruise service at the VIP jetty of Pagla, Narayanganj around 7 pm on the day.

After inaugurating the cruise, the home minister said, this day will be will be remembered as a red-letter day in our national maritime history.

The 750 capacity including 130 in cabins, MV Modhumoti left for Kolkata with 110 tourists on board. The government is launching the cruise facility experimentally; Chairman of Bangladesh Inland Water Transport Corporation (BIWTC) Pronoy Kumar Kanti said and added "So we are allowing only 110 passengers on board with cabin facility."

Moreover, a total of 45 staff, including crews and master, is on board for operating the passengers, the chairman said.

Modhumoti is expected to reach Kolkata at 12 noon of March 31, roaming along Barishal-Mongla-Sundarbans-Antyhara of Khulna and Holdia route of India.

From other side of the boarder, a cruise vessel named RV Bengal left Kolkata for Dhaka from G.R. Jetty in garden reach. Secretary of Shipping, Gopal Krishna inaugurated the launching. It was a low-key event due to election code of conduct.

RV Bengal, the cruise vessel from Kolkata will touch upon Haldia, the Sunderbans on either side of Indo-Bangladesh boarder, Mongla port, Barisal, Chandpur, Narayanganj and Dhaka.

On the way, tourists can see the Sunderbans, the UNESCO world heritage site in its unfragmented proportion, 60-dome mosque in Bagerhat and Sonargaon, the ancient capital of Bengal, said the promopter of R.V. Bengal.

Commenting on the historic trip, Pranay Kanti Biswas, Chairman of the Bangladesh Inland Transport Corporation (BIWTC) said that cruise operators had shown interest in using the Kolkata-Hal-dia-Raimon-gal-Chalna-Khulna-Mong-la-Kawkhali-Barishal-Hizla-Chandpur-Narayanganj-Aricha-Siraj-ganj-Bahadurabad-Chilmari-Dhubri-Pandu-Shilghat (Assam) route, which stretches for 1,535 km.

Earlier, on October 25 last year, the shipping ministries of the two countries finalised the standard operating procedure (SoP) for the movement of passenger and cruise vessels on the coastal and designated inland routes between the two neighbours.

The agreement was signed by Bangladesh shipping secretary Abdus Samad and his Indian counterpart Gopal Krishna in New Delhi.