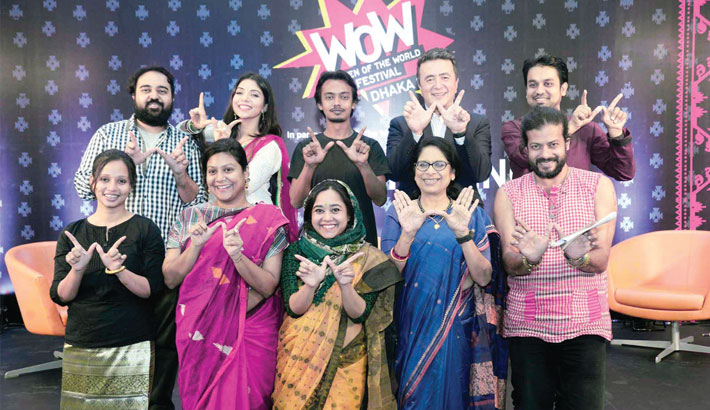 Participants of a press conference on the occasion of WOW Dhaka festival gesture at the British Council auditorium in the capital on Monday.

Women of the world (WOW) festival will be held on the Bangla Academy premises in the capital from April 5-6.

The British Council in partnership with the WOW Foundation will organise the event for the first time.

On the occasion, a press conference was held at the British Council auditorium on Monday.

WOW is an international festival that celebrates the achievements of women and girls, while also focusing on sharing experiences and approaches to tackle continuing inequalities and discrimination faced by them in society. The festival is an inclusive platform for engaging people from all walks of life, both as speakers and audience members, and providing the inspiration and tools to help make a positive change in the area of gender equality.

At the WOW Dhaka festival, people will engage in cross-cultural dialogue with an aim of collective problem solving and finding creative solutions to their everyday life. Panel discussions will focus on issues such as social norms, violence against women, men and masculinity, and feminism.  Various workshops have been designed to help participants understand the reality of women, from different backgrounds, facing hindrances and obstacles on their path to progress.