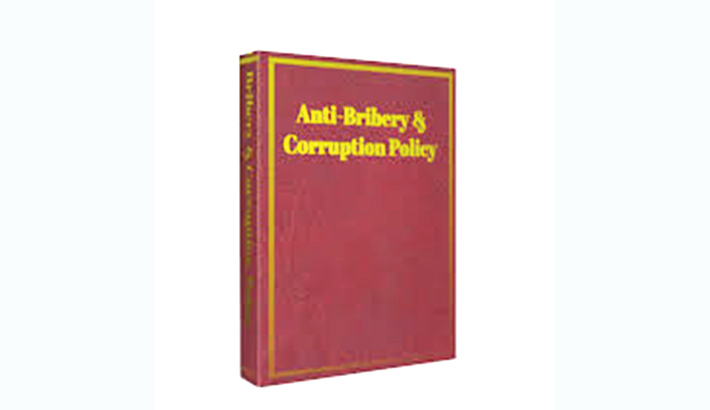 To start the journey of any learning, you need to know the ABC of it first! Similarly, to establish as a successful Nation and State – a country first needs to implement the ABC Policy!! Here, I am referring to Anti-Bribery and Corruption (ABC) Policy. Why? Probably you will all agree with Jeffrey Sallet - the chief of the FBI’s Public Corruption Section – as he stated “Corruption leads to lack of confidence in government. Lack of confidence in government leads to failed states. And failed states lead to terror and national security issues.” The Global Financial Integrity (GFI) estimated that $1 trillion was drained from developing economies in 2012 alone. Regrettably, in TIB’s perception index the position of Bangladesh has been downgraded to 149th in 2018. Amid this, with fresh start of new tenure the Prime Minister has strongly declared her ‘Zero-Tolerance’ principle against ‘Corruption’- which is welcome!

In 2007, Bangladesh acceded to the United Nations Convention against Corruption (UNCAC); though bit delayed but in 2012 the Cabinet Division of the government of Bangladesh prepared and published the National Integrity Strategy (NIS) on 18 October as a comprehensive approach to unite all relevant stakeholders and act for integrity in the country. The government recognising that corruption has emerged as a major deterrent against growth and development in the country, and is inhibiting the achievement of the commitment. The government believes that the fight against corruption cannot be won by prosecution alone, an inclusive approach based on values, morals, ethics and integrity is necessary. The NIS started capturing the approach to help prevent corruption and enhance transparency and accountability both in public and private sector through institutional approach. As primarily proceeds of corruption impacts, involves and channelised through financial institutions; in last few years under supervision of the central bank all scheduled banks/ FIs are trying to create mass awareness among customers and staff and fixing some internal standards on their own under Ethics Committees /NIS Cells. Considering global standards and practices, it is felt in the banking industry that – two key developments are immediately needed from government to fight against bribery and corruption.

In Macro perspective; like the UK Bribery Act, 2010 of UK and Foreign Corrupt Practices Act, 1997 of USA, an Act is required to be applicable for all citizens of Bangladesh and/or the Anti-Corruption Commission Act, 2004 need to be comprehensively updated. In Micro perspective; the guardian of all banks – the Bangladesh Bank needs to dictate a comprehensive operational guideline on ABC Policy. Our central bank has meanwhile experienced very positive outcomes from the industry, where it has circulated policies and monitored the same. Therefore, it is urging from the industry to the regulator to frame a policy that would cover related Procedures where bribery and/or corruption can impact negatively either directly/indirectly or manually/systemically. The ABC related procedures so far are:  *Gift and Hospitality, *Donation/Sponsorship, *Conflict of Interest, *CSR/Charity, *Purchase/ Procurement (agreement with ABC clause), HR (Recruitment, Promotion, Transfer, etc.), Finance/ Accounting (transparent), *Insider-dealing, *Speak-up/ Whistle-blowing and *Investigation (no influence), etc.

FBI special Agent W. B. McMurry uttered, “There is undoubtedly a global push toward anticorruption that has never really existed, even just a decade or two earlier.” Similarly, local banks and FIs are currently facing significant challenges on more than 30 questions only on ABC practices (in addition to around 300 questions on AML/CFT/Sanctions); while they are trying to complete the Wolfsberg due-diligence questionnaire of global banks to establish Correspondent Banking Relationship (CBR). If the practices of local banks are not up-to the minimum standard, CBR is either not established or terminated by the global banks/regulators. In such cases, Wage-earner Remittances, export-Import businesses of Bangladesh would significantly be hampered and our banking and financial industry tend to be threatened.

In view of the above, we all can apprehend that, it is the high time to enact ABC laws, circulate ABC policies and comprehensively practice ABC procedures at all relevant stages of the entire nation. Otherwise, we might regret of becoming a confidence-less failed state, deprived of foreign remittances and investments and unnecessarily welcoming terror and security issues and above all unfortunately derailing ourselves from the mission of becoming ‘Middle Income Country by 2021’.