An Articulation Of Girl Power! 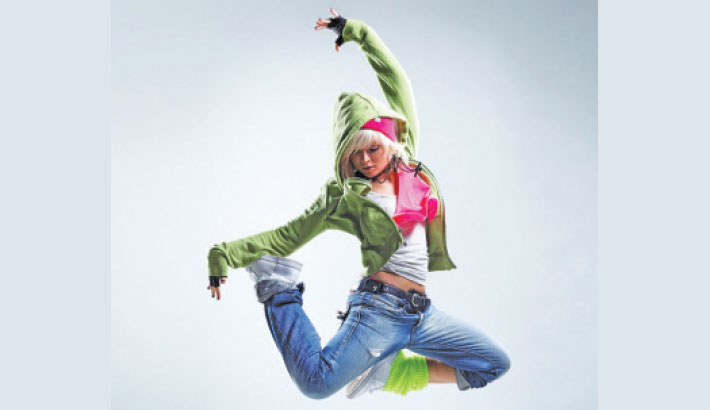 Dance has always been seen as a feminine art for its graceful moves and aesthetic expressions. Whether it is classical dance or ballet, we have usually seen more participation of women than men. However, there is one dance form that is an exception to the rule. It’s street dance! In Bangladesh, it has been a solely man’s world with the trend changing only recently. Even in the word’s etymology, we see why this dance must have had only male proponents in the beginning. Women coming out and taking streets doing street dance was an unthinkable idea. In fact, hip hop dance itself is an emerging scene in the country with Anonymous Crew pioneering the movement in 2011, followed by other talented crews such as Blue Poppers, B-Bots, etc. So when girls also started to take the stage side by side their male counterparts over the last few years, it was a refreshingly new sight for the country.

One such video was O2 Street Dance Crew’s Women’s Day video which featured a few talented female street dancers. Their videos received over 10,000 likes. The dance moves were so clean and there was so much power in every dancer’s movements that we can safely say that the movement has begun. Girls are rocking in this sector just as much as guys.

Another such video that went viral a few days back was that of a young girl, Simin Chowdhury, doing popping. Her style was flawless and her expressions priceless! “I can’t remember a time when I did not dance. Dancing was always there as long as I can remember,” she said. Currently Simin is learning Odissi, Kathhak and Folk dance at Bangladesh Academy of Fine Arts. “Besides that, I practice tutting, hiphop, popping and animation on my own with the help of the internet!” Simin is already popular for her dance but she said her biggest moment is yet to arrive. “But so far my favourite stage moment was when I represented my country in Germany in front of a global audience. I portrayed the six seasons of Bangladesh through my dance, and people were dazzled to discover the diverse beauty of our motherland.” Being a girl and a dancer has never been so easy and Simin said not everybody appreciated it. “I get somewhat anxious on stage if I am not very familiar with the crowd. I try to enjoy the dance more rather than memorizing the steps and delivering. I prefer free-styling and people’s cheers help me a lot too! Apart from dancing, music and art have also always been there with me. I love singing my heart out as well as pouring my thoughts and messages into my art pieces.” 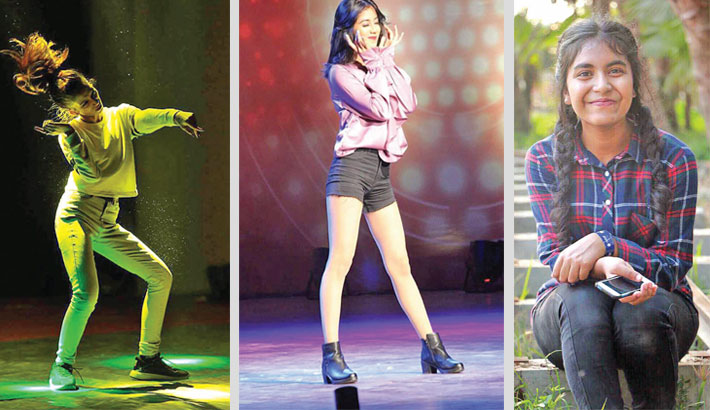 Shefa Tabassum is another female dancer who had crossed borders and brought fame and glory for Bangladesh. “I started dancing at the end of the year of 2016. Basically I started dancing by getting into KPOP (Korean pop music). This genre of music has very different and unique style of choreographies and visuals. I was very much influenced by it.” Shefa reminisces the time she represented Bangladesh. “My biggest moment in my dance career was when I got chosen to compete at the Changwon KPOP world festival 2018 in Korea. It was the first time someone got chosen from Bangladesh in three years. And of course, winning as the best solo performer was a huge moment for me!” Shefa is a famous name in the dancers’ world and she is slowly helping in turning the tides. More girls are seeing her and getting inspired to enter the field. However, it was not always easy for her. “I faced quite a few hardships on the way. People, including my family as well, were not very much ready to accept the fact that a girl is dancing in a different category such as hip hop and urban. And not being familiar with the term KPOP and western dancing at that time, people were very much unsupportive of it and even some were outraged. They are still unaware of it and have very little knowledge about it but I think it will get better with time when they get more exposed to it. And of course, I also had a lot of support too, which led me and encouraged me to pursue dancing more.” Shefa is a great performer. Her style, attitude and energy are profound on stage. However, deep inside, it has not always been easy for her too. “I still have stage fright every time I go up on stage. But I guess my love for dancing overshadows my fear. I always tell myself – ‘no matter whether you lose or win, do not let opportunities slip by. Be brave and have faith in yourself. Learn and experience as much as you can’. The adrenaline rush is something I live for. I love taking risks and dancing in front of so many people is definitely a challenge for me but I still do it because it’s my one way of expressing myself through art. And I hope more female dancers will get the courage to come up and do and show what they love!” These are some powerful words from a powerful woman who has definitely proven what she can do with the award she has brought from Korea to Bangladesh and for Bangladesh.

With the whole urban dance and female dancers being a buzzing topic at the moment, a short film was made on it. The main cast was Tabassum Sadi Farhana Promy who is a singer, dancer as well as an architect. The film portrays powerfully the struggle of a young woman who must choose between dream and regular life. Society is still very stereotypical and a woman dancing, moreover doing urban dancing, is seen as blasphemous even by the members of the family. The motto of the video was #LiveYourDream and it depicts very articulately why dreams are important. Director Nahian Siddique as well as everyone of the team ‘Equilibrium Films’ did an amazing job.

Perhaps it was a short video. But thousands and thousands of people shared it. This is what keeps the circle going. Remember Ridy Sheikh who crossed borders and appeared in Dance Plus 3, a popular show by choreographer Remo on Star Plus. Ridy who was also in ‘So You Think You Can Dance Russia, season 1 and 5’ has shown not just our country but the world the immense talent women here have. There are multiple other short videos which are like ripples of a wave. Dancer Anika Tabassum Shimu did a video on the song ‘7 Rings’ by Ariana Grande. Everyone praised her dancing style. Not all the videos are by solo dancers or group female dancers. There is one, for example, by The B-bots of two guys and a girl dancer. In fact in this video, it was the girl who took the limelight while the guys very gracefully sat behind giving their full support and made the frame more gorgeous.

Well, street dancing is still a challenge for women here. But these brave and talented dancers have paved a way for other girls to follow. The male dancers in the community have always been extremely supportive. And that is just the best ingredients for anything and everything great- raw talent, determination, courage and support from others. It is a common phenomenon to see girls doing great in this genre all over the world. Someday female street dancers from Bangladesh may also become just as famous as those excelling elsewhere.