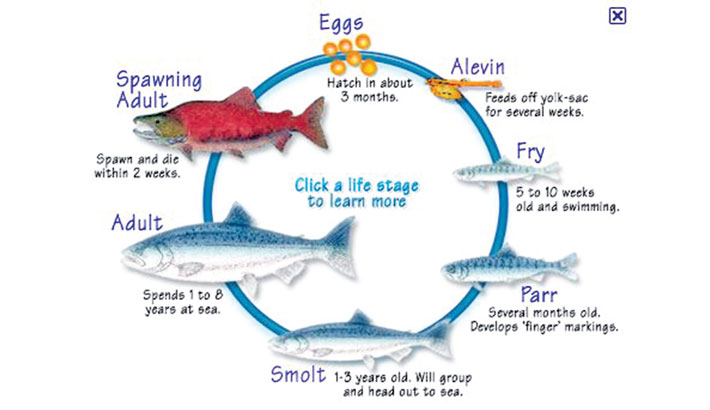 Every year millions of fish migrate to their native habitat. Migration is a peculiar kind of population dispersion which involves mass movement of population. In some migration adult fish live in the sea and migrate upstream towards the riverhead to spawn, and in some migration adult fish live in fresh water and migrate into salt water to spawn. Some migratory fish are salmon, smelt, shard, striped bass, most of the eel fish, tuna, hilsa, etc. Hilsa migration involves the fish moving from one type of water body to another on a regular basis.

The fishes often get blocked from completing their journey. When they can’t reach their habitat their population can’t grow. Fish migrate to their spawning and rearing habitats to reproduce. Some fish need to swim thousands of miles through oceans and rivers to reach these freshwater destinations.

Marine forage fish often make large migrations between their spawning, feeding and nursery grounds. Migration movements are associated with ocean currents and with the availability of food in different areas at different times of year. Movements of fish in fresh water also occur; often the fish swim upriver to spawn.

Hilsa, Tenualosa ilisha (Hamilton), by habitat is a marine environment species but they migrate to estuarine and fresh waters for spawning purposes. Peak upstream migration of hilsa in the rivers mostly starts with the onset of south west monsoon. Tagging experiments have shown that a hilsa may cover as much as 70.8 km in one day.

Hilsa fishery exists with two distinguished peaks in monsoon and winter in Hooghly-Bhagirathi linkage of Ganga River system. In Bangladesh waters, during the peak breeding season the adult fish run in shoals to the estuaries and the rivers and migrate upstream as much as 1200 km (usual run 50-100 km/day) for spawning.

During last few decades the fish has depleted in the riverine environment of many countries due to rapid siltation and other degraded ecological conditions including wanton destruction of jatka (juveniles). It is, therefore, necessary to formulate and implement a good management plan, especially conservation strategies, for sustenance of this highly prized fish across the world.

In Bangladesh, the timing of migration, which starts in early September with a peak in October to early November, is highly related to the state of sexual maturity, and the volume of freshwater input through river discharge and run-off into the sea during the monsoon season (June–September) and onwards. Some other factors such as current velocity, temperature, salinity, turbidity, primary productivity and availability of food plankton also influence the movement of hilsa from the sea into the river.

Reconciling the above facts, it is logical to conclude that the hilsa population of the northern Bay of Bengal primarily inhabits marine waters and migrates to freshwater for spawning. Hilsa as a single species accounts for 12 per cent more than half of the total marine catches. About 2 per cent of the entire population of the country is directly or indirectly engaged with hilsa fishing. Particularly large stocks are found in upper Bay of Bengal region sustained by the large river systems.

The global hilsa catch is reported as 75 per cent from Bangladesh water, 15 per cent from Myanmar, 5 per cent from India and 5 per cent from other countries such as Thailand and Iran. There are some reasons for disturbed hilsa migration. Due to various anthropogenic activities, climate change effect, increased siltation and rising of the river basins, the migratory routes as well as spawning grounds of hilsa are disturbed. They are often blocked from completing their journey by manmade barriers, such as dams and culverts and oceanographic changes like high turbidity, increased flooding, more tidal action and changes of salinity, etc.

Hilsa fecundity ranges from 1.5 to 2.0 million eggs for fish ranging in length from 35 to 50 cm. Hilsa fecundity is declining in different areas due to climate change and the declining fecundity is greatly impacting on hilsa production. Due to shifting of the spawning ground at the lower zone, the survival rate of juvenile hilsa is seriously affected. Once power plants are built, the river of this region will be the source of water for the plants and hot waters will be dumped into the rivers. Thus the most crucial migration route for the hilsa fish to come to rivers from the Bay of Bengal will be disrupted.

To us Bengalis, hilsa isn’t just a fish. It’s an integral part of our culture and heritage. But they aren’t anymore safe in our rivers and seas. Hilsa fish migration should not be obstructed, so necessary steps should be taken by concerned authority.