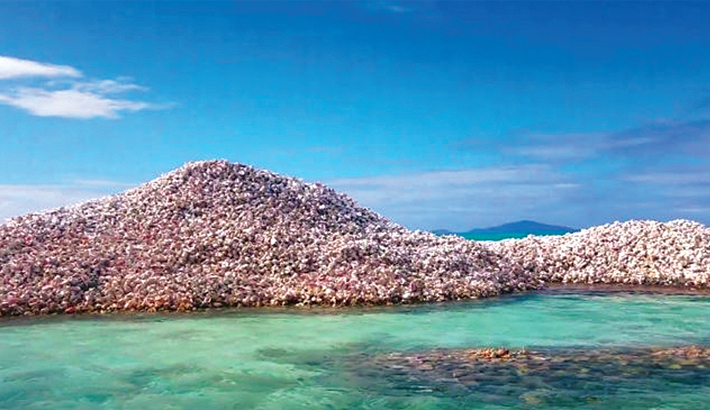 Conch “Island” isn’t technically an island, but a mountain of conch shells discarded by fishermen in the same place over hundreds of years.

Located just east of Anegada, the second largest of the British Virgin Islands, in the Caribbean, Conch Island is both a stunning tourist attraction and a testimony to the popularity of conch meat in this part of the world. For centuries, local fishermen have been diving in the shallow waters on this side of Anegada in search of these, slow-moving, edible marine snails and many of them have been throwing their large shells in the same spot. The shell mountain that is Conch Island is a result of their perseverance.

Conch are harvested both for their meat, which is a staple of Caribbean cuisine, and for their stunning-looking shells, which are sold as keepsakes and jewelry. This made me wonder why local souvenir sellers don’t just use the shells of Conch Island instead of buying them from fishermen. Apparently, while these millions of conch shells make a stunning sight from a distance, they aren’t that pretty up close.

“These shells aren’t as pretty as you probably think they are,” Reddit user Viking Mart explained on the popular social network. “Most of of them are defaced. This is because in order to get the conch meat out, fishermen usually make a hole by the ‘nose’ of the shell. This is to reach and loosen the snail muscle (with a screwdriver or knife), and then pull it out. This leaves these conch shells defaced and one would probably have a hard time selling them.”

Scientists extracted some shells from the bottom of Conch Island and, using radiocarbon dating, they were able to determine that they dated back hundreds of years, all the way to AD 1245 ± 80.

“These conch burial grounds support the fact that the indigenous Arawak people lived on Anegada thousands of years ago,” experts say.

Modern day conch fishermen have been contributing heavily to the rise of Conch Island over the past 200 years, but while that has made it that much more attractive of a tourist attraction, it has also put the snails on the endangered species list. They’ve been so overhavested that their very existence is threatened all over the Caribbean.

Conch Island isn’t exactly the largest man-made island in the world, but it’s large enough to be visible on Google Earth.