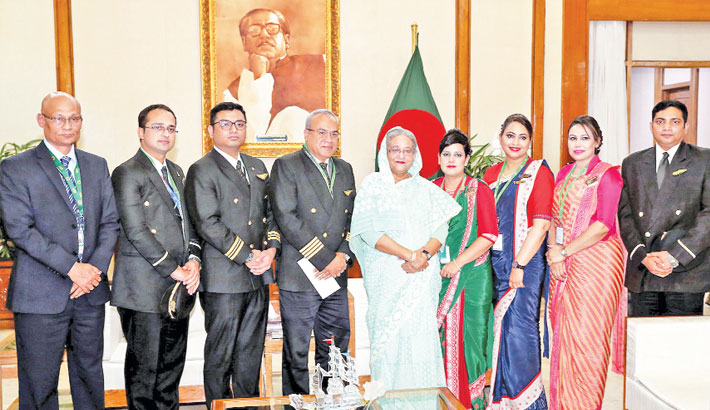 Prime Minister Sheikh Hasina on Thursday highly lauded the pilot, Captain Golam Shafi, and other crewmembers for successfully tackling the bid to hijack a Biman aircraft with their “extraordinary courage and wisdom”, reports UNB.

The Prime Minister’s appreciation came when the pilot, first officer Muntasir Mahbub and five cabin crewmembers met her at her official residence Ganobhaban.

Describing the crew as ‘heroes’, Sheikh Hasina said this is a rare instance in the world that such incident ended without any loss of life and property. “It’s your huge success that no life was lost and the aircraft was also not damaged,” Ashraful Alam quoted her as saying.

She said no incident of plane hijacking across the world could be tackled so successfully like this. “In many of such cases, people were killed and property damaged, and it took a long time to resolve the crisis.”

“You’ve showed strong courage, intelligence and wisdom. Your intelligence, instant plan and courage are extraordinary. In such terrible moments, many people can’t stay cool,” the Prime Minister said pointing at the pilot and the crewmembers.

Hasina constantly enquired of the incident, Khokan said. She said she directed for taking all the passengers, pilot and crewmembers out of the aircraft safely as she was always worried about the loss of life rather than damage to the property.

On Sunday last, a miscreant named Palash Ahmed with a toy gun attempted to hijack the Biman aircraft that was going to Dubai from Dhaka via Chattogram with 148 passengers on board.

However, joint forces foiled his bid and he was eventually killed in a commando operation.