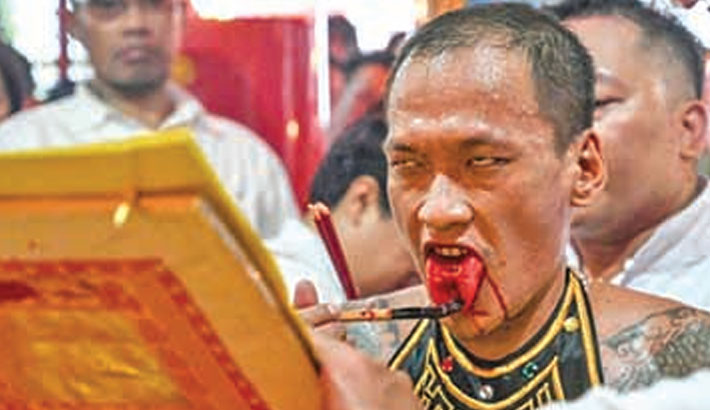 JAKARTA: Eyes rolled back in his head, a heavily tattooed Indonesian man sliced his tongue with a dagger in a bid to communicate with other-worldly spirits, reports AFP.

The gory spectacle at a Jakarta temple marked the 15th and last day of Lunar New Year, known as Cap Go Meh in the Southeast Asian nation.

With a significant ethnic Chinese minority, Muslim-majority Indonesia on Tuesday celebrated the end of two-week festivities welcoming the Year of the Pig with traditional lion dances, colourful parades and temples decked out in red lanterns.

In Indonesia’s section of Borneo island, Chinese shamans shocked onlookers with chains and swords embedded in their faces.

At the Jakarta temple, the man in a trance-like state wrote messages with the blood from his sliced tongue to the spirits in an effort to ward off evil.

With a long needle still embedded in his cheeks, he finished off the ceremony with a chug of booze.