‘IS fighters face surrender or death’ 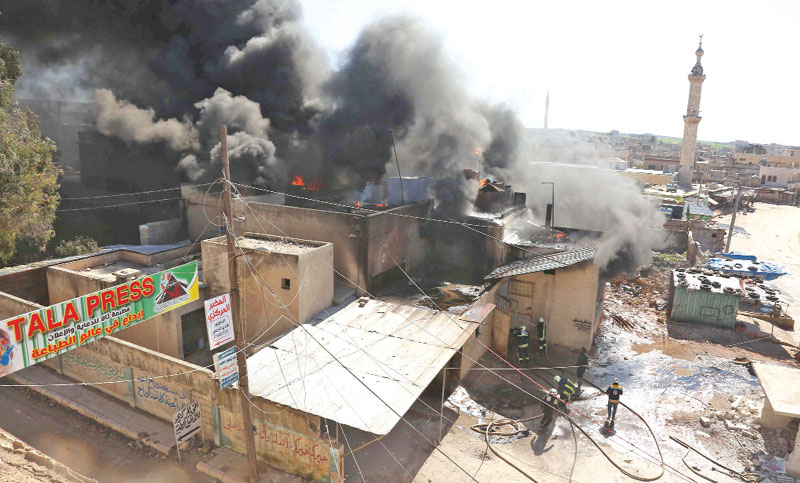 Members of the Syrian Civil Defence (The White Helmets), put out a fire at the site of reported air strikes in the town of Khan Sheikhun in the southern countryside of the rebel-held Idlib province, on Wednesday. —PHOTO AFP

OMAR OIL FIELD: Jihadists defending their last dreg of territory in Syria will be “killed in battle” if they don’t surrender, a Kurdish-led force said Tuesday ahead of a final showdown, reports AFP.

The US-backed Syrian Democratic Forces (SDF) said they are trying to evacuate civilians trapped in the last half a square kilometre (0.2 square miles) of the Islamic State group’s once-sprawling “caliphate” before storming the jihadist holdout.

“We are working on secluding and evacuating civilians and then we will attack. This could happen soon,” spokesman Mustefa Bali said, declining to provide more details on the operation.

IS fighters “have only two options, either they surrender or they will be killed in battle,” he said.

IS declared a “caliphate” across large swathes of Syria and neighbouring Iraq in 2014.

A small hamlet of buildings in the village of Baghouz is all that is left of the proto-state, which at its height spanned an area the size of the United Kingdom.

The United Nations on Tuesday expressed concern over “the situation of some 200 families, including many women and children, who are reportedly trapped” in the IS holdout.

“Many of them are apparently being actively prevented from leaving by ISIL,” the UN said in a statement, using another acronym for IS.

The frontline in Baghouz was quiet Monday afternoon. Tattered buildings and the twisted skeletons of cars dotted the side of the road.

At the entrance of the village, the SDF had turned an embattled building into a temporary base.

Dino, a 26-year old fighter who has battled jihadists for years, said “the nightmare is over. We have saved the people” from the IS group.

“The first battles were difficult. We did not know our enemy very well but today we know them intimately.”

Thousands of people have streamed out of IS turf in recent weeks, but no civilians have made it out in the past three days.

Those that managed to escape have been ferried on trucks to Kurdish-held camps for the displaced to the north.

The International Rescue Committee said Monday that 62 people, mostly children, had died on the way to the Al-Hol camp or shortly after arriving in past weeks.

Beyond Baghouz, IS still has thousands of fighters and sleeper cells scattered across several countries.

In Syria, it retains a presence in the vast Badia desert, and the jihadists have claimed deadly attacks in SDF-held territory.

US President Donald Trump said the fall of the IS proto-state would be announced last Saturday, but the SDF says it is holding up a victory declaration until it can secure the evacuation of civilians trapped in the last redoubt.

An SDF official on Monday said that an announcement will be made this week.

“In a few days we will announce a great victory over the largest terrorist organisation that waged war on the world and wreaked chaos and death everywhere,” Zeidan al-Assi said in a statement.

Trump stunned allies in December when he announced all 2,000 US troops would withdraw from Syria as IS had already been defeated.

The withdrawal plan is expected to be accelerated once IS is defeated.