Thousands of supporters ready to bring in US aid: Guaido 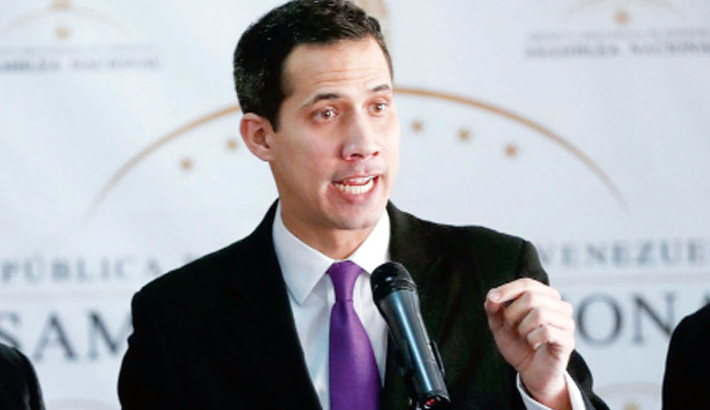 CARACAS: Venezuelan opposition leader Juan Guaido on Saturday said he was mobilizing thousands of volunteers to help bring American aid into the country next week as President Nicolas Maduro vowed to strengthen border security and block what he called a US invasion, reports AFP.

Guaido’s announcement came as tons of US food aid was piling up along the border with Colombia, in the latest flashpoint in the country’s building political crisis.

Guaido, whose claim to be interim president now has the support of more than 50 countries, told his rally that 600,000 people had registered to help bring desperately needed aid in through different border points.

“Not only will this be happening at the border where the volunteer movement will be, but in cities up and down the country where there will be demonstrations on February 23 for the aid to come in,” the National Assembly leader told thousands of supporters, many in white T-shirts and hats in the colors of the Venezuelan flag.

In addition to the aid arriving in Colombia, Guaido said, more would be coming through Brazil and the Caribbean island of Curacao.

Several tons of US aid have already arrived in the Colombian border town of Cucuta. The US Army plans to deliver an additional 200 tons in coming days, a Pentagon official said Friday, speaking on grounds of anonymity.

Guaido repeated his call on Venezuela’s military—whose support for Maduro has been crucial in the growing crisis—to stand aside and let the aid pass.

“You have, in your hands, the possibility of fighting alongside the people who are suffering the same shortages you are,” Guaido said in a tweet addressed to soldiers.

But Maduro, who asserts that aid could be used as a cover for a US invasion, called for reinforced border security. He dismissed the arriving aid as “crumbs” and “rotten and contaminated food.”

On Friday he instructed his army to prepare a “special deployment plan” for the 2,200-kilometer (1,370-mile) border with Colombia. He said he would examine “what new forces” might be needed to keep the frontier “inviolable.”

Maduro claimed that US President Donald Trump and Colombian counterpart Ivan Duque had worked out “war plans against Venezuela” when they met Wednesday in Washington.

Venezuela and its neighbors have been shaken by the power struggle between socialist leader Maduro and Guaido, who proclaimed himself interim president last month.

A grave economic crisis has left millions in the once-wealthy country living in poverty, facing shortages of basic necessities such as food and medicine.

Some 2.3 million Venezuelans have fled the country since 2015 as a result, according to the United Nations.

Maduro said on Friday that six million families had benefited from subsidized food boxes and he claimed to have bought 933 tons of medicines and medical supplies from China, Cuba and Russia, his main international allies.

“We paid for it with our own money because we’re beggars to no one,” he said.

Guaido accuses Maduro of being a “usurper” over his controversial reelection last year in polls widely branded as fraudulent.

Maduro meanwhile says the 35-year-old National Assembly speaker is a puppet to the US, which he claims is trying to secure access to Venezuela’s gold and vast oil reserves—the largest in the world.

Trump this week repeated his warning to Maduro that “all options” are on the table, including military.

On Friday the US Treasury announced that it was imposing sanctions on five intelligence and security officials close to Maduro.

US Vice President Mike Pence on Saturday called for the European Union to recognize Guaido’s claim to the presidency.

Some 30 European countries have already recognized the former engineer as Venezuela’s leader, but holdouts include Italy and Greece.