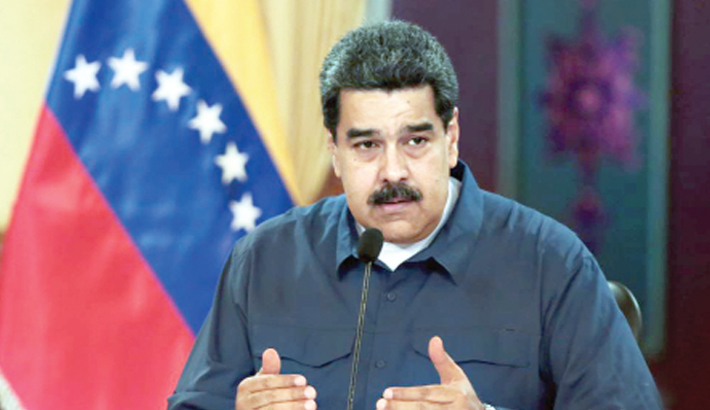 CARACAS: President Nicolas Maduro hit out at the United States on Friday for “stealing” billions of dollars and offering “crumbs” in return as humanitarian aid, as Washington sanctioned five officials close to the Venezuelan leader, reports AFP.

Tons of US aid is piling up in Colombia close to the border with Venezuela as opposition leader Juan Guaido has vowed to defy Maduro’s efforts to block the supplies from entering the country.

“It’s a booby trap, they’re putting on a show with rotten and contaminated food,” said Maduro, speaking at an event in the southeastern town of Ciudad Bolivar.

“They’ve stolen $30 billion and are offering four crumbs of rotten food,” added the beleaguered socialist leader, referring to the United States. Later Friday, Maduro asked the military to prepare for a “special deployment” to reinforce the border with Colombia—and make it “impregnable.”

“I am not exaggerating. In the White House, Donald Trump and Ivan Duque announced plans for war against Venezuela,” he said, referring to a meeting on Wednesday in which President Donald Trump reiterated that “all options” were on the table with regard to Venezuela.

The country is in the midst of an economic crisis that has left millions in poverty and facing shortages of basic necessities such as food and medicine. Guaido, who is recognized by 50 countries as the interim president, accuses Maduro of causing economic hardship through mismanagement.

Meanwhile, US Vice President Mike Pence on Saturday called on the European Union to recognise opposition leader Juan Guaido as the president of Venezuela.

“All of us must stand with the Venezuelan people until freedom and democracy is fully restored,” Pence told the Munich Security Conference.

“So today we call on the European Union to step forward for freedom and recognise Juan Guaido as the only legitimate president of Venezuela.”

Guaido, the head of Venezuela’s National Assembly, declared himself president of the crisis-wracked country in January, piling pressure on President Nicolas Maduro.

Pence said that after the United States became the first nation to recognise the parliamentary leader as head of state, “52 nations including 30 of our European allies have followed America’s lead”.

“But it’s time for the rest of the world to step forward,” he said.

“Once more the Old World can take a stance in support of freedom in the New World. All of us must stand with the Venezuelan people until freedom and democracy is fully restored.”