Rohingya influx into Bangladesh: A growing concern for local people 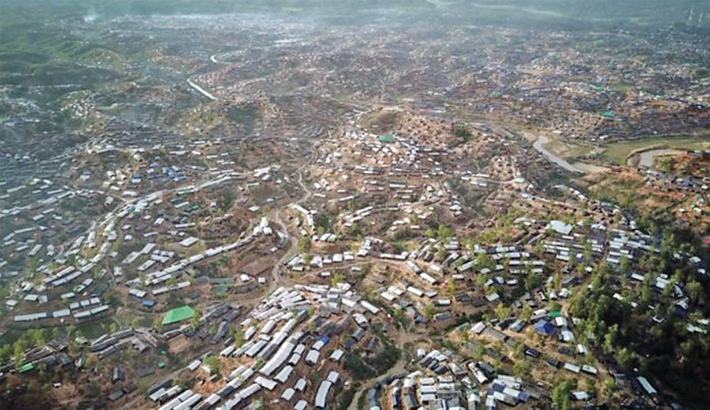 Bangladesh is a Muslim majority nation but being a secular country, it is a land of communal harmony. Here people of all religions live in peaceful co-existence which is undoubtedly a significant matter of pride for the people of Bangladesh. Wherever minorities, irrespective of any religion, are being oppressed and persecuted wrongfully by internal and external aggression in their host countries, Bangladeshi people strongly support the just struggle of oppressed people waging war against imperialism, colonialism or racialism throughout the world. Rohingya Muslims are a glaring example to whom Bangladeshi people, especially the local people, extended help during their hard times.

Following the Myanmar military crackdown on the villages of Northern Rakhine State, where the military forces and local Buddhist extremists carried out atrocities including looting and burning down of Rohingya villages, mass killings of Rohingya civilians, gang rapes and other violence, the Rohingya people started to flee for their lives to Bangladesh, it being a neighbouring country became their destination.

When millions of ill-fated Rohingya Muslims crossed the border, we welcomed them, treated them humanely and helped them by providing shelter, food and other facilities. We believed that Myanmar government will repatriate them within a short time as the world community appealed to it. In the meantime, under a bilateral agreement Myanmar agreed to accept 1,500 Rohingyas each week and we hoped that the flow will be gradually increased. But they were imposing conditions in the repatriation which kept delaying the process, at last 15 November 2018 was fixed in a Joint Working Group Meeting to repatriate 2260 Rohingyas for the first time but it failed to materialise as Myanmar government did not create favourable living environment in Rakhine State for them. The repatriation is now uncertain as the Myanmar Security Forces are fighting the Arakaan Army in Rakhine.

The Rohingya population is now almost 1.5 million in Cox’s Bazaar. It creates massive pressure on the already dilapidated environment of Cox’s Bazaar. A total of 4,300 acres of hills and forests were cut down to provide temporary shelters, facilities and cooking fuel in Ukhiya and Teknaf of Cox’s Bazaar which is threatening the biodiversity of the three ecologically critical areas of the country. Due to indiscriminate hill cutting to provide shelters to the Rohingyas, the terrain of the hills has lost their natural setting, causing a potential risk of landslides.

While locals in Cox’s Bazaar are bearing the brunt of socio-economic and environmental damages due to the massive influx of Rohingyas, their needs are being largely overlooked whereas the demands of Rohingyas are being fulfilled by local or international NGOs which still remain significantly underfunded. Many of the host people in Ukhiya and Teknaf, who provided shelter and food to the Rohingyas in the early weeks of the crisis, are now largely worried and the situation is triggering tension between locals and refugees because the locals are overburdened and losing their freedom in exercising rights over their own possessions in their territory. Their normal life is getting paralysed under pressure of the Rohingya people. As there are similarities between Rohingya and local people in language, culture, religion and behaviour, it is somewhat difficult to distinguish them from the local people, so they also frequently face checking problems by the law enforcement agencies.

Most educational institutions in Ukhiya and Teknaf Upazilla in Cox’s Bazaar are struggling to continue regular classes and tests after the latest influx of Rohingyas from Myanmar’s Rakhine State, as this affected the curricular activities. Some local institutions are still providing space for army and law enforcement personnel and administrative bodies – who are working on the Rohingya crisis, so local people are deprived from their regular services.

Labour class people are the worst victims of Rohingya influx. Labour market became low due to a large number of Rohingyas working for lower wages. The day labourers who depend on hills and forests for their livelihood have also lost their livelihood options as the Rohingyas are clearing forests for fuel and cutting hills to build shelters. Rohingya influx has led to increased pressures on firewood, transport services, water, basic services, environment and competition for jobs.

Local and foreign NGO’s working there recruit youths, but locals are not getting employment in the refugee camps. Besides, currently students on a part time or full time basis working in the camps have added a new dimension in the growing concerns. A large number of college going students in Cox’s Bazaar are engaged with various NGOs. They are concentrated in earning rather than learning and even engaging in unethical and immoral acts with the assistance of Rohingya people. Another fact which is triggering tensions is that most local and foreign NGOs discharged the locals from their jobs and are hiring people from outside the area or even Rohingya people for the jobs which is a violation of government policy. Local people expressed deep concern with the Upazilla administration and demanded the related NGOs to hire them back otherwise they will create impediment in the Rohingya Camps. As a result the inhabitants of Cox’s Bazaar are deeply concerned about chaos and anarchy spreading.

Another concern is the behavioural changes of Rohingyas. It used to be said that the Rohingya people would flee seeing the NASAKA. But they are learning to protest anything that goes against their interest. They are aware about their rights and if there is anything wrong they hold rally in protest of this. It is anticipated that the NGOs are responsible for this change. The local and international NGOs are playing a vital role in discouraging them to go back to their native countries. Even they are unwilling to settle in Bhashanchar. Hundreds of Rohingya families are demanding refugee status under Rohingya Refugee Amendment Act. Apart from this they are showing their authoritative attitudes towards local people who are serving them through NGOs and other international organisations. Majhi, the head of Rohingyas, importantly remarked that, “Your Prime Minister will not harm me. She does not feed me, only the UN and NGOs feed us.”

There were some serious allegations against several charities and NGOs that they encourage radicalism and provide funds to militants. Some NGOs discourage them to go back to their native countries or even to Bhashanchar. A significant number of NGOs are now barred from conducting activities in the camps.

The high criminal activities in the camps are influencing local people. Law enforcers said the basic needs of Rohingya people are met by various NGOs so they pass time unemployed and idly and are being drawn into criminal activities. A number of Rohingyas are engaging in different criminal activities inside the Rohingya refugee camps. After sunset, nobody other than designated law enforcers, has access to the camps, police said this is when the criminals among the Rohingyas start their illegal activities. According to Cox’s Bazaar police and newspaper reports, in last 12 months there have been 22 murders in the Rohingya camps. Official record shows six cases of rape, 68 narcotic related cases and 142 cases related to robbery and petty offences as well as 80 drug related cases. During this period, police arrested more than 1000 Rohingyas for various crimes which also include smuggling, human trafficking and prostitution. A total of 563 Rohingyas have been sentenced. They are supplying yaba around the country using the camps as transit point and store house. Women and girls in particular, are extremely vulnerable with many of them becoming victims of sexual violence, harassment and trafficking.

From early on in the crisis, India remained silent about the Rohingyas, rather they supported Myanmar government and now they are deporting Rohingyas who sheltered in India’s Southeast. More than 1400 Rohingyas have entered from India since early December, adding to a humanitarian challenge that Rohingya camps face in accommodating them. The number of Rohingya arrivals from India has climbed sharply in recent weeks. Saudi Government is also deporting hundreds of Rohingya Refugees to Bangladesh which really added a new dimension to the growing concern.

As inhabitants of Cox’s Bazaar District, we are deeply concerned about our future because we are the victims of the influx. The Rohingya people are spread over the Cox’s Bazaar District. It will be very difficult for us to confront the unfavourable situations due to rapid growth of Rohingya community. So we fervently request the Government to take effective initiatives to control the rampant Rohingya loitering here and there outside the camps and repatriate them with the collaboration of UN and powerful countries through efficient diplomatic channel to save the tourist destination of Cox’s Bazaar.