Shah Abdul Karim : A Bard And His Uniqueness 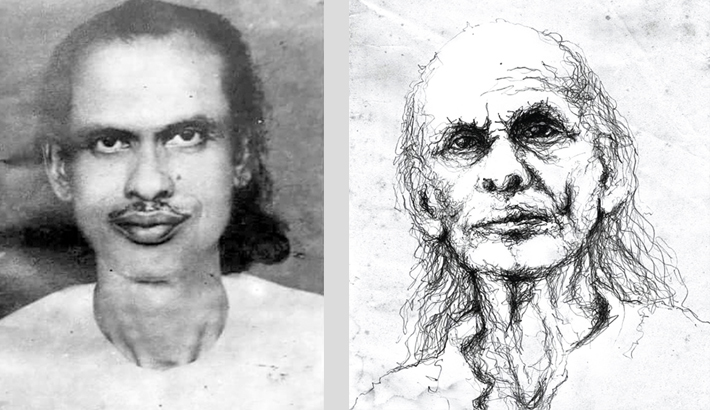 Following the Partition of Bengal in 1905, the British administration in India had to reconsider their decision in 1911 in the face of serious protest and movement by the Kolkata-centered intellectuals and the mass people of West Bengal. Shah Abdul Karim was born five years after that incident. During their six-year-long movement Kolkata’s thinkers concentrated on several logics in supporting their demand of reestablishing united Bengal. Besides all other points, they highlighted Baul music as a common historic and cultural feature of undivided Bengal. While focusing on Baul music they naturally spoke about its most famous icon Fakir Lalon Shah albeit neither Baul music nor Lalon had any agenda of representing Bengal. There is no evidence available that Lalon was a nationalist in any sense rather he was busy in practicing a philosophy (in an organised way), which was expressed through his music. However, Baul music somehow turned into a major component of nationalist manifesto produced by Kolkata’s scholars. It was actually a cultural anti-thesis against the communal thesis of the Partition of Bengal. On the other hand the poor class of Muslim farmers of East Bengal supported partition as they were dissatisfied with the then oppressive zamindari system which was dominated by the Hindu zamindars. Irony of the fate was that with Baul music the philosophy and lifestyle of one underprivileged section was used to silent another disadvantaged group of the society. However, in the name of developing a visionary nationalistic struggle Baul music was presented before the educated class of Kolkata for the first time. Unfortunately the audiences only enjoyed music but not many of them could know that apart from songs Bauls have a separate lifestyle. Thus the introduction of Bauliana with Bangaliyana remained partial. In the later years the music icon who led Bauliana to complete this incomplete introduction with Bangaliyana was Shah Abdul Karim. Karim was born on February 15, 1916, in Derai’s Ujan Dhol village under Sunamganj District. Today, on the 103rd birth anniversary of this great philosopher, saint, lyricist, composer and singer, ‘morning tea’ pays tribute to him.

Anyone may raise question that when Karim himself was not a follower of Baul religion then how could he be credited with the success of spreading Baul music? Obviously Shah Abdul Karim’s Bauliana was different from the orthodox Bauliana of Cheuria (where the Akhra of Faikr Lalon Shah is located), but it doesn’t mean that his Bauliana was excluded from Baul philosophy. Orthodox Bauls create and sing songs as a part of their religious practice while Karim reached the home of Bauliana walking on the path of music. Thus his Bauliana was a bit liberal and more music oriented. And he was not alone on that way as there were many other Baul legends like Hason Raja, Ukil Munshi and Radharaman Dutta, who were also involved in such practice of Bauliana in his own region. Blending different genres of folk music together Karim’s field of music turned more vast and versatile. He positioned himself in the middle of folk and Baul music. Like other Bauls he penned and composed songs on dehototto and spiritualism, but at the same time he didn’t ignore his society and the then class politics. Thus Karim’s songs became a combination of Baul music, folk music and Gono Sangeet (songs of the masses). Many people try to specify Shah Abdul Karim as a bard of Baul genre. But it is quite irrational to limit a free and spontaneous creative genius like him within a specific genre. 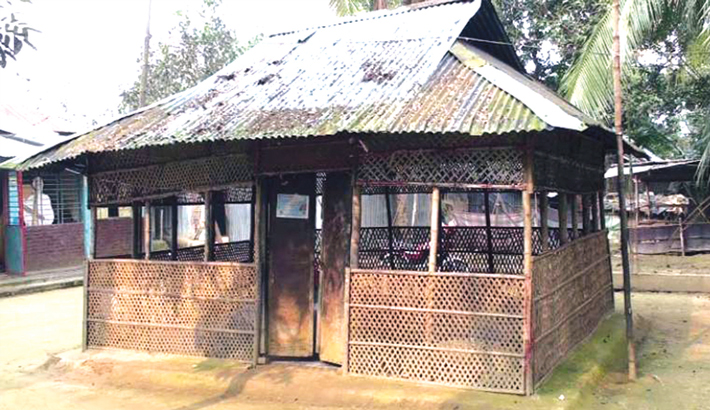 Albeit lyric, tune and singing style of folk songs of different regions have separate characteristics but folk music has never become genre centered like classical music. Rather it is always more independent than other genres of music. Using this freedom Karim had travelled through diverse varieties of folk music and made his own mark. Like other Baul icons he also created a great number of dehotattik songs. But his dehotattik songs are quite different from other Bauls and those songs literally added a new dimension in the field of Baul music. He mastered the language of the body, slowly but assuredly, and intractable mysteries that surround life and the universe began to unfurl before his eyes. For him Baul music was a way to probe the inherent divinity of the body for searching within the self for meaning. Thus he provided simple messages in most of the lyrics of his dehotattik songs but because of the depth and sharpness their appeal turned universal. In his song ‘Gari cholena, cholena’, terming human beings as ‘manobgari’ and the Creator as ‘bondhu’ Karim describes how our temporary human body struggles to survive and approaches towards death. His efficient use of symbolism, which is a common feature of dehotattik songs, is evident in his acclaimed songs ‘Amar matir pinjiray shonar moynare’ and ‘Ajab ronger ful futeche’. Shah Abdul Karim opines about the relationship of human body and soul in his song ‘Hawar pakhi vora amar matir pinjiray’. In the song ‘Moyur pongkhi nau’ he states that, ‘Tumi shujon kandari noukar shabdhane chalao/ Mohajone banaiyache moyurpongkhi nao’. In his song ‘Satar na jania jole diona satar’, he says that one who doesn’t know how to control breathe while swimming shouldn’t swim in the river. In Baul philosophy swimming refers to the sexual activities of human beings. Karim thinks that many people do sex only out of force or lust but if they do that in a polite way, they can obtain cosmic knowledge. He observes, ‘Jhok bujhiya gelere mon, monimukta mile tokhon/ Keu kine omullo roton, keu kore vober bepar’.

When it comes to Baul or folk music, spiritualism is considered as one of the most commendable features for exploring the meaning or innermost essence of life. Bauls mostly speak about their devotion to the Almighty in their spiritual songs. Karim is no exception in this regard. But apart from that the way he depicted human beings’ unending quest for the Creator and the agony of being separated from Him in his spiritual songs made him peerless. In his song ‘Murshid dhono he kemone chinibo tomare’ he asks the Almighty that, ‘Kache neu na dekha deuna ar koto thaki dure/ Kemone chinibo tomare?’ In another song ‘Kon mestori nau banailo’ he uses an outstanding simile comparing human body and boat. Being curious about the carpenter who creates such boats he actually looks out for the God. Besides, his songs ‘Shokhi kunjo shajao go’, ‘Bondhure koi pabo shokhi go’, ‘Bonde maya lagaise’, ‘Ailai na ailai na’ and ‘Ashi bole gelo bondhu’ either tell about the eternal search of human beings for the Creator or they carry the pain of them for being separated from Him. There are many songs of this folk bard like ‘Ami kulhara kolongkini’, ‘Boshonto batashey’, ‘Shokhi tora prem koriona’, ‘Krishno aila radhar kunje’, ‘Ami mon bandhibo kemone’, ‘Keno piriti barailare bondhu’, ‘Tumi bine akul poran’, and ‘Notun preme mon mojaia korilam ki mosto vul’, where apparently it seems that these are love songs but if the audiences listen to them carefully they find that these are actually the songs with deep spiritual thoughts. 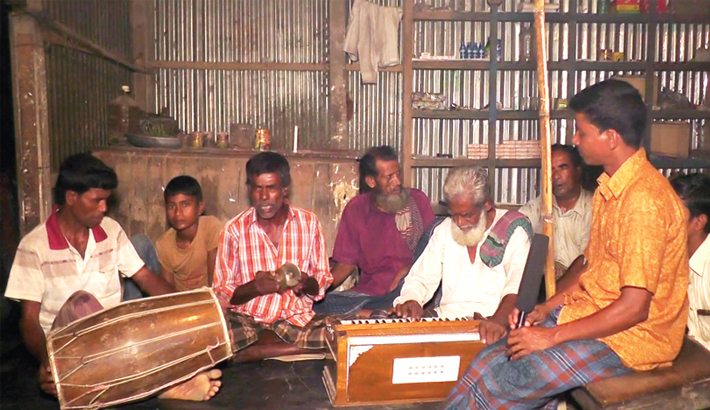 Karim also came up with a lot of philosophical queries, albeit he didn’t discard the role of religion like Lalon. Rather he took inspiration from different religions as his songs were inspired by the Shahajia tradition of Buddhism, Vaishnavism of Hinduism, Sufism of Islam and several others. Instead of questioning various norms of religion, Karim emphasised on the coordination and coexistence of different religions. His popular song ‘Age ki shundor din kataitam’ is an excellent example of this thought. The great score is now considered as the signature song that speaks about the secular ideals of traditional Bangali society. Besides, in many of his songs he spoke about the changing trend of society and the struggle of ordinary people. Karim’s 1600 songs are organised in his six books ‘Aftab Sangeet’ (1950), ‘Gono Sangeet’ (1954), ‘Kalnir Dheu’ (1984), ‘Dholmela’ (1990), ‘Bhatir Chithi’ (1998) and ‘Kalnir Kuley’ (2001). As an outstanding bard and impressive singer he repeatedly expressed his gratefulness to Baul music through his songs like ‘Gan gai amar monre bojhai’, or ‘Mon mojale ore baula gan’ as he felt from the core of his heart that his music has made his life meaningful.

Deprived of the blessings academic education, Karim garnered knowledge from the Mother Nature. Growing up with the soothing breezes, flowing over the Kalni River and Tanguar Haor, he learned the liberal philosophy of life. Deciphering the cryptic language of nature as a Sufi saint he utilised that knowledge in creating quality music which ultimately made him a legendary icon of Bangla music. Karim didn’t remain strict only in practicing a particular philosophy rather he used his music as an instrument to change the society. He freed Baul music from its archaic mode of thought, narrow thematic range, uninspired symbolism and insipid lyrics. He termed his song ‘Baula gan’ instead of ‘Baul gan’. And adding this extra phone (a) with the term Baul Shah Abdul Karim started his journey transcending the invisible boundary of Cheuria and spread throughout the world.