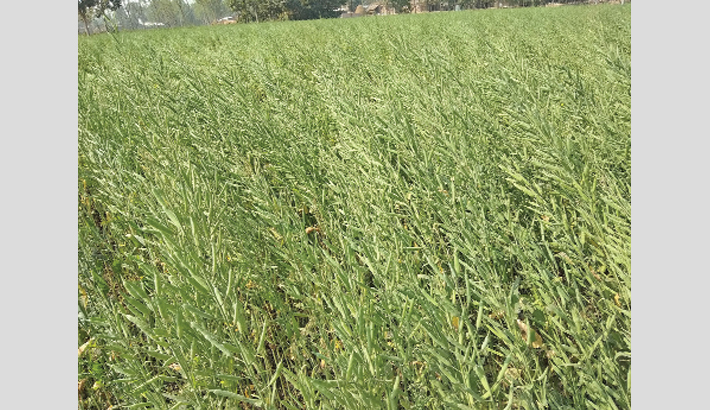 NILPHAMARI: Farmers are expecting bumper production of mustard seed in Nilphamari district due to the favourable weather condition was prevailing in the area. Accordingly the farmers of six upazilas—Domar, Dimla, Joldhaka, Kishoreganj, Saidpur and sadar upazila of the district are widely cultivating of mustard in this season.

Farmer Abdul Latif, 39, son of late Abdul Aziz of Kunda Pukur village under sadar upazila of the district said, “This year I have cultivated of mustard on one acre of land, where cultivation cost of Tk 12,000. Now, I am happy and expecting minimum Tk 10,000 to 12,000 as profit from the land”.

Source of the DAE office of Nilphamari said the office had been arranged more training programmes and carried out campaigns for using organic fertilizer before cultivation.

On the other hand, farmer Abul Kashem 29, son of Jahir Uddin, Chatnai Kolony village, under Dimla upazila of the district said, “We received more training programmes from the DAE office of Nilphamari and expressed about easier process of cultivating of Mustard. It is low costs and high profitable from any other crops. So that, this season I have cultivated of mustard on 1.5 acre of land, which costs Tk. 18,500 only. Now I am happy and expecting bumper production”.

While contacted Abul Kashem Azad, Deputy Director (DD) of the Department of Agriculture Extension (DAE), Nilphamari told the correspondent, “The farmers of Domar, Dimla, Kishoreganj, Saidpur and Sadar upazila have been widely cultivated of mustard in this season. This year the cultivation target was 4,160 hectors of lands. The cultivation target will cross, because the favourable weather is prevailing in the district.