We have a much stronger side this year: Mashrafe 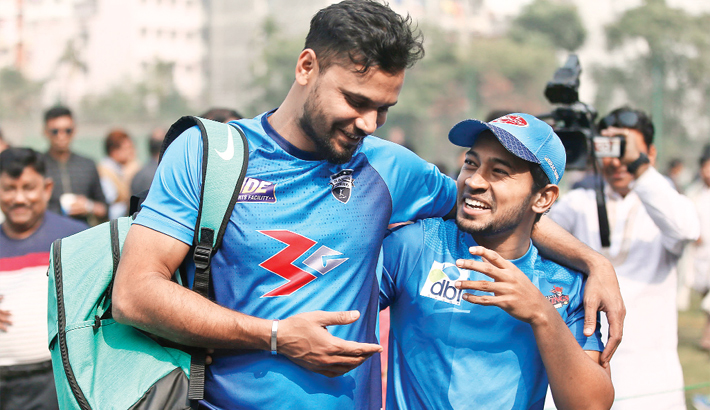 Rangpur Rider skipper Mashrafe Mortaza is confident about their Bangladesh Premier League (BPL) 2019 mission with lots of big names in their ranks. Nonetheless, Tigers ODI skipper admitted the presence of the pressure of expectation.

During a pre-match press briefing at BCB Academy Cricket Ground in the capital on Friday, Mashrafe identified their side as a well-balanced one.

“We have a great and balanced side. We will have to manage the bowling line-up. All of our overseas players haven’t arrived yet. I feel that there is some pressure of expectation on us for being the defending champions but on the other hand I also feel that our side this time around is a much stronger one,” opined Mashrafe.

He also gave due respect to opponenets Chittagong Vikings while reminding everyone that T20 is an unpredictable format as individual players can make or break everything.

“The first match is very important for every team. In this format of cricket a single player can decide the fate of the match. If you take Nidahas Trophy for example, Mushfiqur singlehandedly won a match for us. It is a folly to hope to win a tournament or a particular tournament by just assembling a strong team. They have a very strong team,” expressed Mashrafe.

Meanwhile in Chittagong Vikings’ pre-match press briefing, Mushfiqur Rahim talked along the line set by Mashrafe while trying to divert attention to the effective foreign core despite the presence of big names.

“As it is the first match, everyone will look to commence on a winning note. We also want that. Our opponents are the defending champions but everyone will start from the scratch in a new season. We might not have a very strong side on paper but we have some really effective T20 cricketers in our side. I hope that we will be able to start off with a great match powered by these crickets. Now it’s all about implementing the plans in the field,” concluded Mushfiqur.