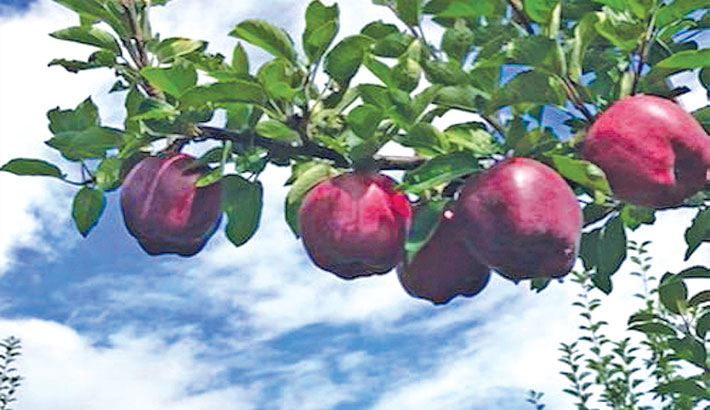 Apples are generally red, green, yellow or a combination of the three, but if the right geographical conditions are met, they can apparently grow dark purple, almost black, as well. These rare apples are called Black Diamond and they are currently only grown in the mountains of Tibet.

Black Diamond apples are a breed of Hua Niu apples (also known as Chinese Red Delicious) that get their unique dark purple color from the geographical conditions of Nyingchi, in the Tibet Autonomous Region. The 50-hectare orchard set up her by Chinese company Dandong Tianluo Sheng Nong E-Commerce Trade Co., Ltd. has an elevation of 3100 meters above sea level, making it the ideal place to grow these intriguing fruit. The temperature differences between day and night are significant, and the fruits get a lot of sunlight and ultraviolet light which causes their skin to go from the characteristic deep red of Hua Niu apples, to dark purple.

“Black Diamond apples are purple, gleaming, and have a nice texture. From the outside, the apples almost look like candle wax, and are as beautiful as a diamond. That is how they got their name,” Ms. Yu Wenxin, Market Director at Dandong Tianluo Sheng Nong E-Commerce Trade Co., Ltd., told Fresh Plaza.

Production at the Nyingchi orchard started in 2015, three years after the trees were planted, but, due to a number of factors, they can only be found in a select number of high-end supermarkets in Beijing, Shanghai, Guangzhou and Shenzhen, and are usually sold in gift packages of 6 to 8 fruits. According to Tencent News, the price of Black Diamond apples is around 50 yuan per fruit.

“Because the Chinese production is limited, and distribution costs are rather high, the highly priced black diamond apples belong to the high-end segment of the market,” Yu Wenxin said. “We mostly sell them in gift packages of 6 or 8 apples. Last year, small quantities of our apples were sold to high-end supermarkets in first tier cities in China, where they were received very well.”

Metadaan reports that due to the low temperatures Black Diamond apple trees require to bear dark fruits, their growth rate is much lower than average. While most apple breeds reach maturity in 2 to 5 years, these trees require no less than 8 years. Furthermore, only about 30% of the orchard’s yield meet the standards of color compliance to be sold as premium Black Diamond apples.

It’s issues like the ones mentioned above, coupled with the special geographical conditions required to grow Black Diamond apples that make fruit growers reluctant to adopt this breed. Black Diamond apples are a bit of a mystery, even among experienced apple growers, as apart from the handful of sources listed in this article, there really isn’t much information about them online. Some users of the Growing Fruit forums, for example, are convinced these dark purple apples don’t really exist, while others claim that the photos circulating online have been enhanced to make the fruits darker than they really are. But until someone gets their hands on a Black Diamond apple, there’s really no way to know who’s right.