Frozen fish comes back to life 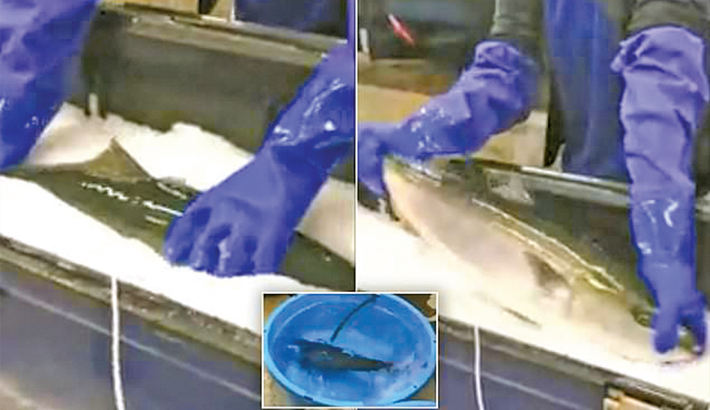 A viral video that has been viewed over 50,000 times shows a fish being frozen in ice at a fish market in Japan and then seemingly brought back to life in a tub of warm water.

The video starts with the fish being submerged in a vat full of crushed ice and then cuts to a thermometer that indicates that the temperature inside the vat is -2.10 degrees Celsius. A man than takes the fish, which at this point looks frozen solid, and passes it to a man wearing a black suit who then puts it into a plastic tub filled with warm water. The video then cuts again, this time showing the same man grabbing the fish by its tail and trying to turn it under the stream of warm water, at which point the fish starts to move. Gasps of amazement and laughter can be heard from the people witnessing the ‘miracle’, before the video cuts forward once again, showing the fish thrashing around in the warm water, to prove that its movements are not just involuntary nerve spasms.

The video was uploaded to the Pro Fishing Videos Facebook page on Wednesday and has already been viewed over 50,000 times. Feedback has been mixed, with some of the people commenting on the video expressing their amazement and asking questions like “what sorcery is this”, and others simply branding it as animal cruelty or calling the whole thing fake, mainly because of the many cuts in the footage.

So what’s really going on here, did this people really bring the fish back to life, or is the whole thing just another fake story gone viral? Well, it’s hard to say, but personally I think it’s neither. Yes, the video cuts forward a bunch of times, but the fish looks stiff even after being put in warm water and when it suddenly starts to move. But I don’t think it was dead or even frozen solid, either. It was merely left in crushed ice, at a temperature of -2.10 decrees Celsius for a short period of time.

Some reptilians can actually be frozen solid for a fairly long period of time and then thawed and reanimated. We even posted a story about some alligators surviving in a frozen swamp in North Carolina by going into brumation (a state similar to hibernation) with their snouts sticking out of the ice, for breathing. This fish was only in ice for a few minutes, so it’s not that hard to believe that it survived. It’s just a case of suspended animation, if you ask me.

While looking for answers online, I found another similar video that went viral two years ago. Also shot at a Japanese fish market, this one shows a smaller fish taken out of a freezer. It looks frozen solid, but after being placed in a metal tub full of warm water, it eventually starts to move. Unfortunately, this video also cuts forward at one point, so it’s not exactly irrefutable evidence that this reanimation is real. It’s still pretty cool, though.