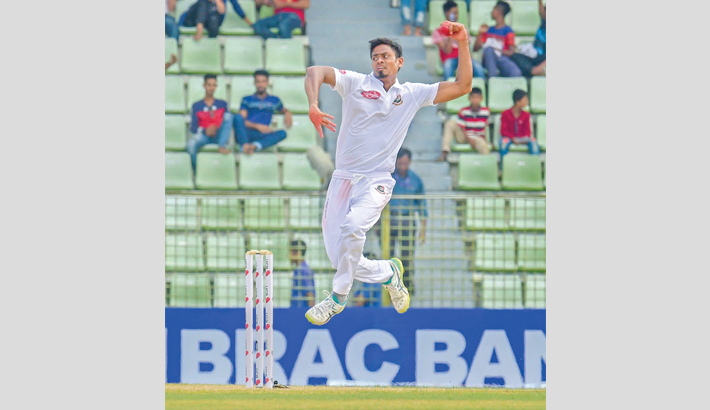 Bangladesh cricketer Taijul Islam delivers a ball during the second day of their first Test against Zimbabwe at Sylhet International Cricket Stadium on Sunday. — AFP Photo

Hosts Bangladesh faced an uphill struggle to save the first Test after the Zimbabwe’s rampant pacers caused havoc with the ball on day two in the first Test at Sylhet International Cricket Stadium on Sunday.

Visitors’ pace duo Tendai Chatara and Kyle Jarvis tore through the hosts’ batting order by sharing 5 wickets as Zimbabwe bowled out Bangladesh for a paltry 143 runs in their first innings in reply to the Visitors’ 282 runs.

Zimbabwe were one for no loss at the close of the second day in their second innings with an overall lead of 140 runs, leaving the home team to face an uphill task to save the match with three days still to go.

A limp batting performance by Mahmudullah’s men, with only Ariful Hauqe (41*), Mushfiqur Rahim (31) and Mehedi Hasan Miraz (21) showing some resistance, has left them straggling on a brand new Test pitch that has favoured spinners, especially in the last two days of the game.

Earlier, Tigers had their moments of control in the opening session. After displaying mediocre show on the opening day, their bowlers turned in a better performance yesterday with the ball and bowled out the tourists’ innings just before lunch.

The morning session belonged to left-arm spinner Taijul Islam who took 2 wickets in the opening day, claimed 4 more wickets on day 2 and finished with the figure 39.3-7-108-6. The rest of the day belonged to the visitors.

The tourists started the day with 5 wickets in hand, but Taijul gave a perfect start for Tigers, removing Regis Chakabva early for 28 runs.

A little later he removed junior Masakadza before Nazmul picked up his second wickets by having Mavuta.

Taijul then claimed his fifth and sixth wickets by dismissing Jarvis and Chatara to bring an end Zimbabwe’s first innings.

Peter Moor fought along and was unbeaten on 63 runs.

The hosts were never comfortable in response as the disciplined Zimbabwe bowlers especially Jarvis and Chatara made it difficult for them to score runs.

Most of the Bangladeshi batsmen threw away their wickets with impatient strokes.

Straightway the hosts were on backfoot as they lost their top five batsmen inside 49 runs.

Chatara was the chief tormentor in Bangladesh’s innings claiming 3 wickets to leave the home team in tatters.

Dependable Mushfiq (31) hastened the downfall of the team by playing a foolish shot, lured by Jarvis who bowled outside off stumps consistently to invite him to play shots.

Test specialist Mominul continued his miserable batting against off-spin as he failed to negotiate off-spinner Sikandar Raza and was caught at first slip for 11 runs.

The procession continued when captain Mahmudullah was completely deceived by Chatara for a duck.

Miraz and Ariful showed some resistance with a 30-run stand but Miraz’s dismissal effectively closed Bangladesh’s slim chances to earn the lead.

Sikandar kept up the pressure with his off-spin by having Taijul and Nazmul and the score became 143 runs for 9 wickets.

“We are still aiming for a win with three days in hand. The wickets will favour the bowlers last three days so we have still some chances. We will try our best to limit the tourists’ second innings in 150/160,” Taijul who claimed 6 wickets for Bangladesh said during the press conference.

“It was just a bad day for Bangladesh. You cannot deliver good batting or bowling every day. Our batsmen are capable of playing big innings and surely they will show their best effort in the second innings. Claiming 5 wickets is always special for a bowler but I always want to see the team’s good position first,” he added.