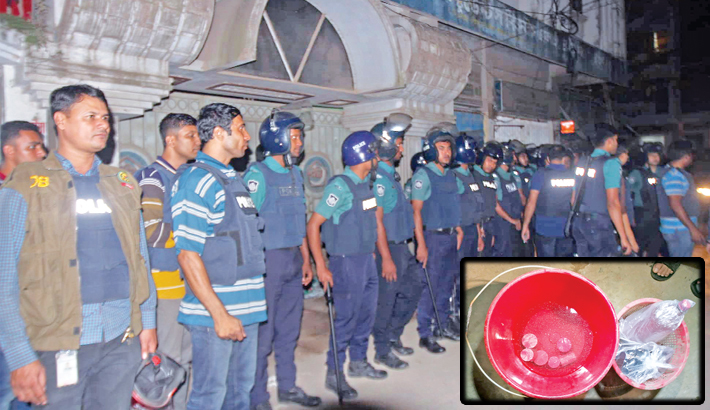 Policemen are deployed in front of the office of Islami Chhatra Shibir, student wing of Jamaat-e-Islami, on DC Road in Chattogram city on Saturday following crude bomb explosions inside the office. (Inset), the crude bombs, which were recovered from the office. —RABIN CHOWDHURY

CHATTOGRAM: At least four bombs were exploded at the office of Islami Chhatra Shibir, the student wing of the Jamaat-e-Islami, during a police raid in the city’s Chandanpura area on Saturday night.

However, none was injured or arrested in connection with the incident.

Police also recovered six cocktails, some bomb-making materials, including gunpowder, petrol and the student wings’ organisational documents, from the office during the raid.

Sources said police launched a block raid in the area at around 7:30pm to recover illegal firearms, drug and arrest warranted accused.

As cops reached near the Shibir office, sounds of multiple explosions were heard while smoke was also noticed emitting from it, said police.

Deputy Commissioner (DC-South) Mehedi Hasan of the Chattogram Metropolitan Police (CMP) said they called in additional forces and the bomb disposal unit for sweeping the office after the explosion.

The bomb disposal unit found evidences of explosions on a roof of the building and recovered the explosives and documents, he added.

Later, Shibir men fled the scene through a cave-like secret way developed inside the building, said the police officer adding that they started an investigation into the incident.